Ode to the Latin Novus Ordo 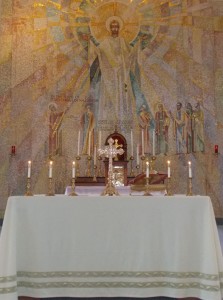 The altar at the O'Connor Center, before Mass Tuesday May 1

I want to recommend that the sung Latin Novus Ordo Mass celebrated the first Tuesday of each month at the Bishop O’Connor Pastoral Center is very beautiful (I think there is also a sung English Mass the third Tuesday). I had an opportunity to attend this Mass this week. Monsignor Delbert Schmelzer celebrated. Aristotle Esguerra and Joan Carey were the choir singing all the Gregorian chant, and they were very good! And the great Victor Kelly was the server.

Msgr Schmelzer giving a homily at an Extraordinary Form Mass at Holy Redeemer Church. I love his homilies too.

Monsignor Schmelzer is one of my favorite priests, I have the deepest respect for him. He substituted for a couple of weeks at St Paul’s the summer before last when I was sacristan there.  I knew that Monsignor Schmelzer celebrates the Extraordinary Form Mass sometimes (indeed, High Mass) at Holy Redeemer Church on Sunday mornings–but when I suggested the new Mass in Latin (the pastors Fr Eric Nielsen and Fr Eric Sternberg usually have that on Fridays), he said he’d only done that once in his life, many years ago. He was visiting France and they didn’t have an English Sacramentary. Although not immediately prepared, he seemed to want to. Latin is more reverent, he said. Although I assured him that it was just an idea and he certainly didn’t have to, he said, maybe next Friday. He’d have to study and familiarize himself with the Latin Missal first.

The next Thursday, I think I remember he was not well, I think he had a bit of a cold or something, and there was a far deeper suffering too, after Mass he told me his brother passed away the day before. My heart totally went out to him. He is in his early 80s and retired, I was just so grateful he was coming to say Mass for us, giving us Jesus.

I got him a pot of Gerbera daisies with three beautiful orange blooms, a condolence gift and because of his sacrifice to be there for us. I thought surely he will not, but he got there on Friday and pulled out the Latin Missal and read through it some. I don’t think he had actually gotten to study at home. But he was determined! It was something else; he said Mass like he says the old Mass in rapid Latin, there were moments of unintended blending of the forms, it was awesome. After Mass he picked up the flowers and, although he just lost his brother, (maybe he offered Mass for him) really smiled with real joy and said “I’m going to enjoy these!”

So besides the movingly beautiful Gregorian chant, that gave me joy at Mass Tuesday.

Is it the 50th anniversary of the beginning of the Second Vatican Council we are celebrating this year? Do you know that the Council said, although the use of the vernacular is permitted to be expanded where the local bishop allows it, the use of the Latin language is to be preserved, Gregorian chant is meant to have pride of place in the liturgy, and the people should know in Latin the parts of the Mass that pertain to them? Perhaps this aspect of implementing the Council has had to wait 50 years for the euphoria to wear off of being allowed to have Mass in English! Truly, I have no argument with knowing what we are praying. But, I really do love it in Latin.