State Journal anti-Catholic? My own experience

The Diocese of Madison has a statement in regards to bad Wisconsin State Journal reporting.

Statement of the Diocese of Madison, regarding coverage of the delicate situation in Platteville, in the Wisconsin State Journal

This past weekend, the Wisconsin State Journal chose to run a story on the sad events surrounding the closing of St. Mary’s School in Platteville.

Instead of reporting the facts as they are, the State Journal opted to turn one of the expressed reasons of Bishop Robert C. Morlino’s letter (that of “In charity and in justice, I must caution you most strongly that this cannot continue. I do this now in sincere hopes of avoiding the issuance of Canonical warnings [or penalties]”) into the exact opposite and the basis for their entire story.

The corresponding headline falsely reads “Bishop Morlino warns dissenters to stop — or else,” when no warning was given. Rather, his was an appeal to reasonable Christian charity, in a sincere attempt to avoid that very thing.

This careless and scurrilous misrepresentation of the bishop’s communication is only the latest in a series of stories that seek further to divide the Catholic Church, which it has done, in a seemingly systematic and consistent way, since Bishop Morlino’s arrival, almost nine years ago and even before.

Through distorting the truth, impugning the faith, and undermining the authority of the Church, the Wisconsin State Journal has succeeded in fostering needless discord among the faithful. The present occurrence is certainly among the most outrageous, when the opposite of the bishop’s intent was reported.

Why would one not conclude that the Wisconsin State Journal is anti-Catholic?

Maybe this is a good moment to raise an issue I have with the State Journal. I was quoted in their front page article about the March 23rd rally against the HHS contraceptive mandate–but later when the online version of the article was edited to correct an error, my quote was removed in spite of no error in relation to my quote. Here is the dead-tree edition article: 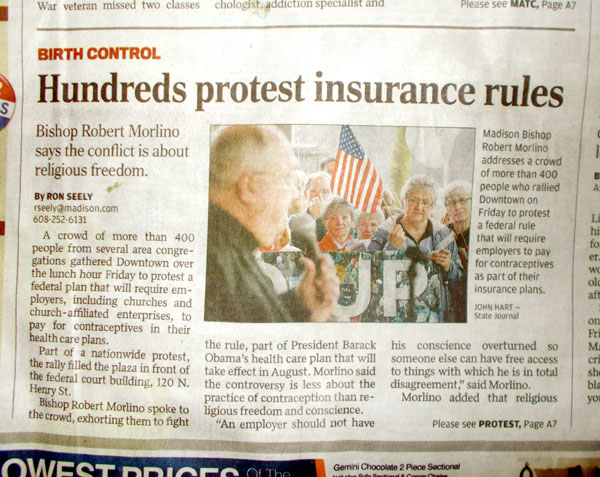 Below the fold front page article from Sat, Mar 24 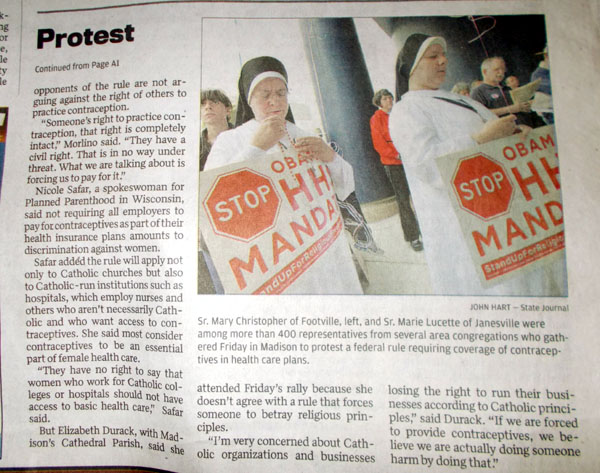 The pg A7 continuation of the article, with my quote at the end

I want to tell you Ron Seely, the reporter, was very professional to talk to, and I think he wrote a basically good article that apparently got eviscerated by his editor. He approached my friend Gail and me at the rally because we were holding aloft handmade signs I’d made. He asked us each why we’d come to the rally, and his quote of me in the article reflects accurately what I said. He then listened attentively and respectfully, and asked good questions for perhaps 5 minutes while I spoke reasonably and passionately of my beliefs, as a woman, an American and as a Catholic. As he was turning to go, he said, “Thank you for being willing to have your name in the paper”, and I said “Absolutely”. I had been frustrated that the media narrative too often excludes Catholic women who believe in Catholic teaching as actually promoting the good of women, men, children, families, and society, so it was refreshing that a reporter listened willingly! And my impression of his good will continued when I read his article.

At some point after its publication, the online version of the same article was changed, with the note at the bottom: “[Editor’s note: This story has been changed to reflect a correction. Places of worship would be exempt from a federal rule that requires employers to pay for contraceptives in their health plans. The original story incorrectly described the rule as it applies to churches.]” But the editors were not content to simply change the way the HHS mandate was described. My quote, which you notice has no error of any kind and does not actually mention churches, is now gone from the story. It’s just Bishop Morlino vs Planned Parenthood now; the editors perhaps did not really want the voice of a practicing Catholic woman. I didn’t notice the change till April 10, when I emailed my objection to Ron Seely, the reporter, and quickly got a reply: “Thanks for your thoughtful note. I’ll talk to the editors.” However my quote has not reappeared in the article, which now concludes with Planned Parenthood’s absurd contention that not forcing all employers to pay for contraception “amounts to discrimination against women”.

I still want my quote restored to the public record in the online version of the article, since there was no error in regards to my quote:

But Elizabeth Durack, with Madison’s Cathedral Parish, said she attended Friday’s rally because she doesn’t agree with a rule that would force someone to betray religious principles.

“I’m very concerned about Catholic organizations and businesses losing their right to run their businesses according to Catholic principles,” said Durack. “If we are forced to provide contraceptives, we believe we are actually doing someone harm by doing that.”

To echo the diocesan statement about the FAR graver wrong of the WSJ article on St Mary’s Platteville, Why would one not conclude that the Wisconsin State Journal editors just didn’t like my Catholic viewpoint?

3 Responses to State Journal anti-Catholic? My own experience