Pray for the homeless

At my volunteer job on Wednesday, a St Vincent de Paul program called Vinny’s Lockers where we help the homeless to store their belongings, a man and a woman came in, and the woman had a huge black eye and swollen cheek.

“It was at Occupy,” she said, “this woman hit me. Fractured the orbit of my eye socket. She’s been charged with a felony.”

“Was she drunk?” asked the other volunteer, Bob.

The woman nodded. It happened a little over a week previously. The assailant was the sister of the man, who had also been hit, and had a cut near his eye which he said he’d been told should have had 4 or 5 stitches but he waited too long before seeking care. There was nothing that could be done for the woman with the injured face, though she said it didn’t hurt unless she poked it. She was already suffering a broken foot, and said that had hindered her defending herself. She took Bob’s hand and made him feel her grossly swollen, purplish cheek. I thought of Jesus bidding Thomas probe his wounds. I speculated that the woman who hit her while drunk was probably sorry now, and she agreed probably so.

“Occupy Madison” which had been “home” to about 50 mostly homeless people, had, after months at its site on East Washington Avenue, been dismantled just the day before this conversation, by order of Mayor Soglin. Another client of our program had been part of the leadership of the camp and had spoken candidly before about the extent and seriousness of the problems they had there, even though they were trying to work with the authorities to improve the situation. The “Occupy” denizens enjoyed the community they’d formed, which was now more an alternative kind of homeless shelter than a radical class-warfare thing, and there was some idealism about helping one another. But the reality was that Occupy was enabling vice and crime rather than helping, and the city made a mistake facilitating it in the first place.

I truly love my volunteer job and love the homeless people. I pray for them every day. These folks are in need of all sorts of real help. There have been calls for an extension or new site for Occupy, but a squatter site is not what is needed; there is NO serious possibility of that being healthy.

Mayor Soglin has said Madison is a homeless magnet and cannot meet the needs of all the homeless in the upper midwest. All right I can understand that, but I dream that we (for instance St Vincent de Paul) could build a new shelter and put together a program that supports people to get serious about facing their problems and growing to be successful at normal, stable, responsible life again (I have in mind the amazing Haven for Hope in my parents’ city, San Antonio TX). But it should be said, lots of credit is due to organizations in town already doing good work on that, especially Porchlight.

As to the “Occupy movement” properly speaking, I do not have a very good feeling about it. I have much more sympathy for the homeless. Pope Benedict had the best things to say just recently:

Pope Benedict XVI used a speech to foreign diplomats May 4 to warn governments against exacerbating inequalities of wealth during the current economic crisis.

“When poverty coexists with the very rich, a perception of unfairness is born that can become a source of rebellion,” said the Pope.

“It is therefore appropriate that States ensure that the social laws do not increase inequalities and enable people to live decently.”

The comments were made in an address to five new ambassadors to the Holy See who were presenting their diplomatic credentials to the Vatican.

Speaking in French, the Pope noted that the present global economic crisis has brought “more and more families to an increasingly precarious situation.” Previously the “creation and multiplication of needs” had led many people to believe “in the possibility of unlimited enjoyment and consumption.”

Now, however, those hopes have been dashed and “feelings of frustration” have emerged with “loneliness due to exclusion” on the increase.

Some Italians tried to Occupy the Vatican this January, with complaints that the Vatican (a tiny sovereign state) doesn’t pay Italian taxes. This didn’t last long; the Vatican is wise enough to not give “Occupiers” their own comfortable parking lot to protest in, or punch each other in the eye in. Though they do try to do right by Rome’s homeless. They’d better: 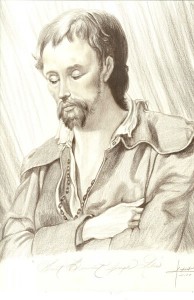 Saint Benedict Joseph Labre, who died homeless in Rome in 1783. Drawing by Kathy S., a former homeless Vinny’s Lockers client and talented artist, after a historic portrait of him.

Please pray for Madison’s homeless, that they may find proper housing and suitable help for their needs, material and spiritual, and that they may have the grace to accept and cooperate with that help.

One Response to Pray for the homeless