Sister Simone: good on immigration, but what does she believe about abortion? 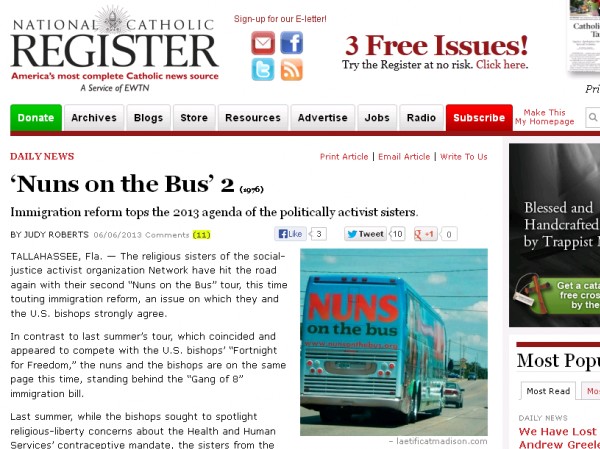 My friend Jeanne who did a pro-life and religious freedom protest of the Nuns on the Bus stop in Janesville with me and then went with me to the formerly-Catholic Holy Wisdom Monastery where Sister Simone was scandalously giving a reflection at their Ash Wednesday service and headlining another event there, sent me a link to a National Catholic Register article from yesterday about a new tour they’re undertaking, that used my photo of the tour bus on the road, from last year on the way to Janesville. Yes, they’re back on the road again, this time for the topic of immigration reform.

I don’t have the slightest problem with a campaign in favor of immigration reform and amnesty for undocumented, but otherwise law-abiding people who here in our country. In fact, I have a problem with Catholics who grumble against the bishops’ concern for these immigrants. I’ve known hardworking and decent people who were in the country illegally, doing the kind of work most people didn’t want, usually in order to send money home to their impoverished family in Mexico. What these people who I knew were doing actually impresses me, and I cannot imagine not being on their side. I cannot imagine not being on the side of families who came here with young children who grow up here, but are nevertheless “illegals” in danger of deportation and without all the benefits of citizenship. It’s not right. Catholics must support amnesty for these people.

I made a point firmly that the food-stamp-cutting Paul Ryan budget that the “Nuns on the Bus” campaigned against last time is a matter of “prudential judgement”; one could be either for or against it as a Catholic (in fact, Sister Simone’s campaign motivated me to witness to the truth by voluntarily UNENROLLING from the too-generous $148/mo in food stamps I’d been getting. I have not remotely starved.). Amnesty is not a prudential matter, I feel this is something Catholics must support (that it is a less grave matter than halting abortion is not an excuse for not supporting it), and I think that is what the bishops are saying too.

But Sister Simone and NETWORK do not get a pass from me for allying again with the pro-abortion-rights, pro-“gay marriage”, anti-religious-freedom George Soros funded political group Faith in Public Life, which is again supplying the services of their staffer Casey Schoeneberger as media liaison. For that matter Casey, who is a Catholic, should not be working for such a group, which is in no way compatible with commitment to the Catholic faith. It was Laetificat Blog that helped make her presence on the tour public knowledge.

So what about Bishop David O’Connell of Trenton, NJ appearing at a Nuns on the Bus “friendraiser” event in his diocese? Well, I might not have suggested to him to do that, but on the other hand I am entirely in favor of helping Sister Simone and NETWORK Lobby to aspire to be in sync with the bishops and to be deserving of their support. So, I don’t care to give him any flak for it.

At the Nuns on the Bus stop in Janesville, Sister Simone had a little press conference (above) and I yelled a question that I know she and everyone heard perfectly clearly, asking what she meant when she’d said that she feels like she would get a rash if she described her social justice work as being pro-life. She didn’t respond. When I asked her more directly whether she supported the US Bishops’ Fortnight For Freedom which was then underway, she said “it’s complicated,” and when I asked if she supported the HHS contraceptive and abortifacient mandate, she said “it’s complicated,” and in fact Casey Schoeneberger was also responding to me and trying to cover for Sr Simone.

The NC Register article concludes with this:

Along with supporters, the tour has run into protesters, Sister Simone said. In one town, she said, “There was a persistent group of four who described themselves as tea party people, who were upset that we were trying to change laws. Part of that group also was upset that we were doing immigration and not abortion. The part that broke my heart was, much as I talked to them, they couldn’t see that this is a pro-life, pro-family issue.”

Asked whether “Nuns on the Bus” would take up an issue like abortion in the future, Sister Simone said, “We’re pro-life, so it’s possible. The thing is, at Network, our issues have been economic-justice issues and not gender-sexual issues, but if there is an opportunity, we’re pro-life, so I’m not saying No.”

Okay, Sister, I’m not unfriendly to the idea that immigration is also “pro-life and pro-family.” But if you’re opposed to the legal right to abortion, we look forward to seeing and supporting your bus tour for that, and your “friendraiser” with Father Frank Pavone. I assure you I and others would support that: I told you at Holy Wisdom Monastery that we love you; you smiled and thanked me. But so far you’ve made no statements at all that would suggest you’re a supporter of a right to life from conception to natural death, and have appeared not to believe in that, since you supported Obamacare with the HHS contraceptive and abortifacient mandate intact, and even when I asked you about it directly you would not say the mandate was wrong. Who can believe you’re pro-life in regards to abortion when you do not evince that either in words or actions?

“We’re pro-life, so I’m not saying No” is not yet a statement of personal endorsement of the natural moral law or Catholic teaching. But I haven’t despaired yet, so don’t disappoint me, Sister.