Tim Virnig of the Knights of Divine Mercy, the man in the lead, says on facebook: “The reason I look so serious is that it was taken immediately after the police officer was confused and thought we didn’t have the correct permit. I was praying fervently that they wouldn’t stop us.” 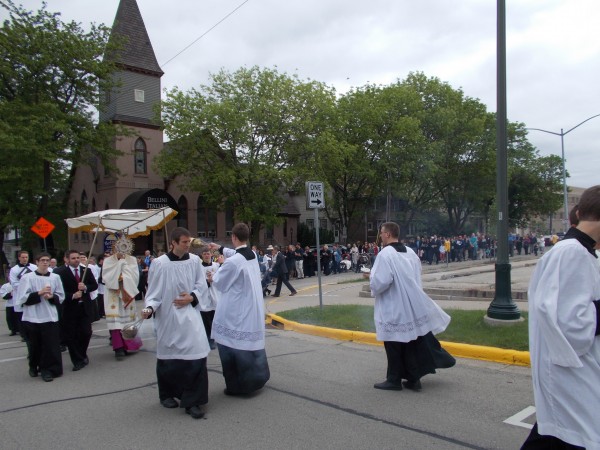 We started out from Saint Patrick Church following 11am Mass for the Feast of Corpus Christi. Here the procession turns onto East Washington Avenue, headed toward Capitol Square. Monsignor Kevin Holmes carries Our Lord in the monstrance. Four Knights of Divine Mercy carry the canopy. A great crowd of the faithful follow! 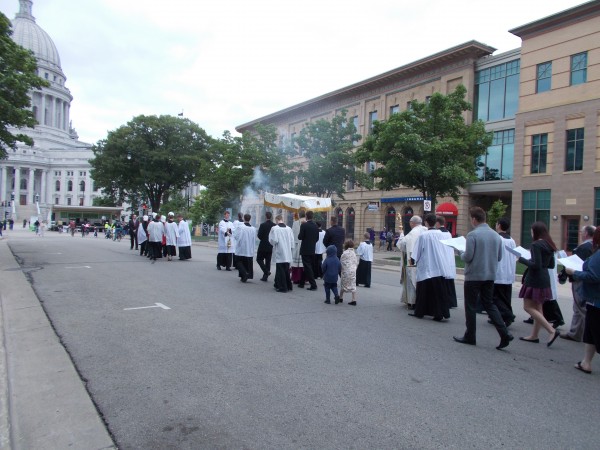 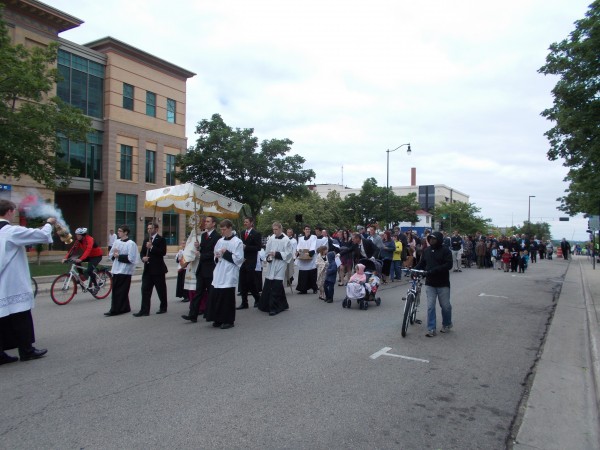 The band paused while we processed by with the Blessed Sacrament. 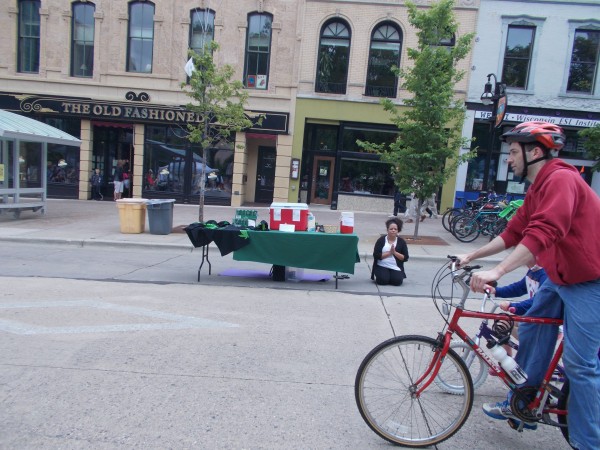 Some people had a reverent reaction. 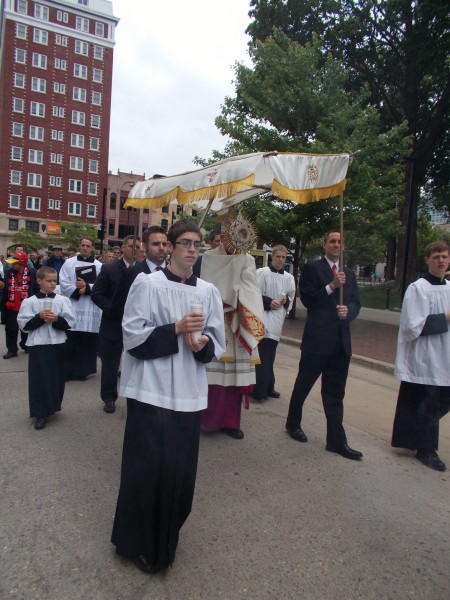 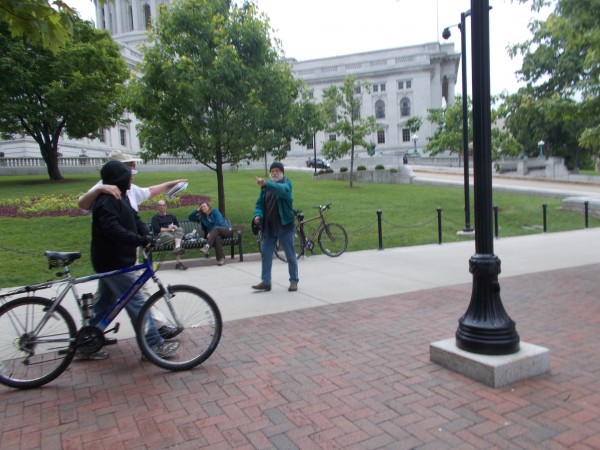 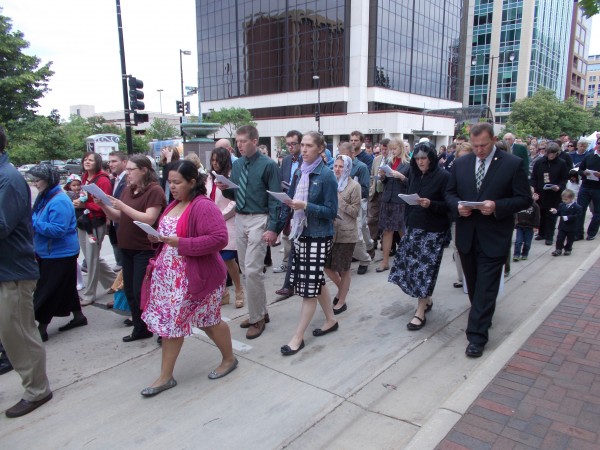 The Church and Progressivism, sometimes going “Forward!” in opposite directions. 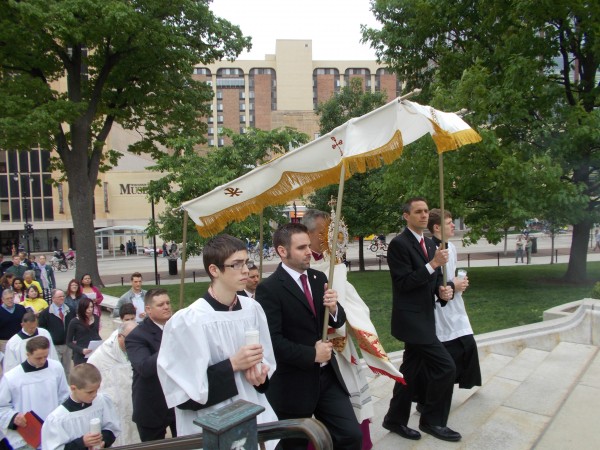 A Knight of the Kingdom of Mercy (Fr Rick) demonstrates what one does when Jesus passes by.

Over on the left, Karen Paschke is reading from Sacred Scripture. 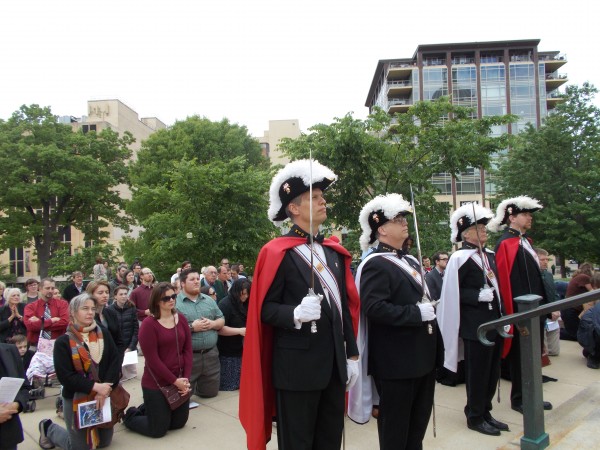 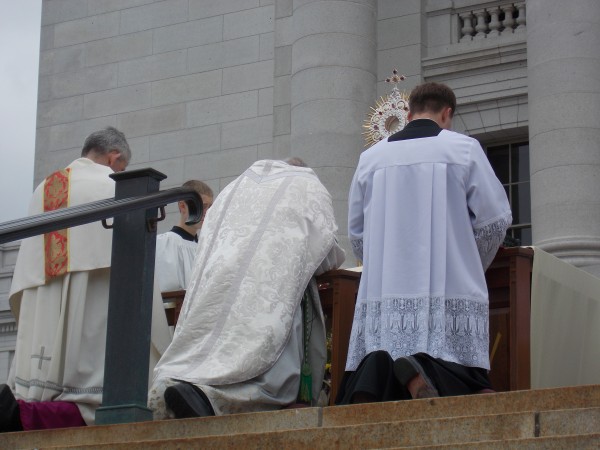 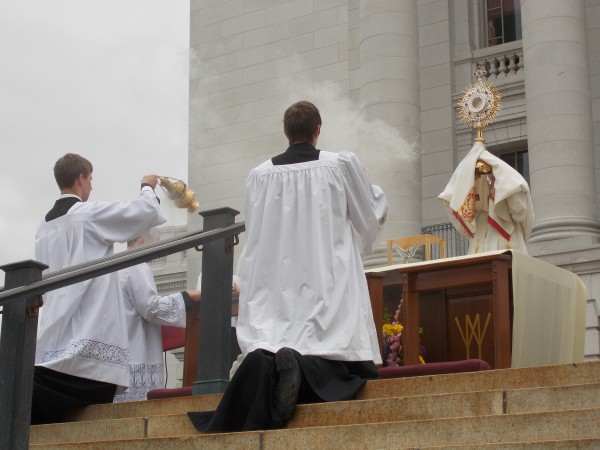 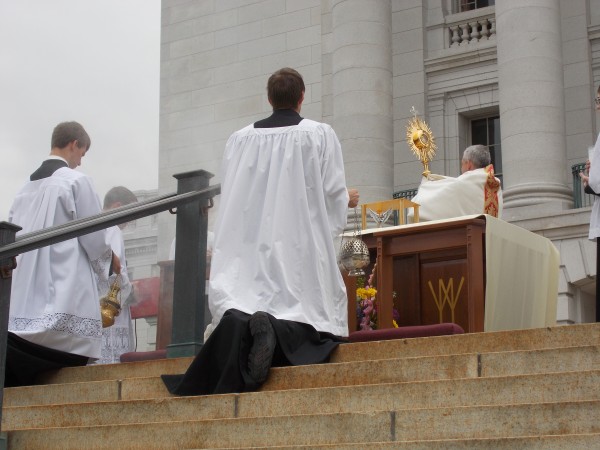 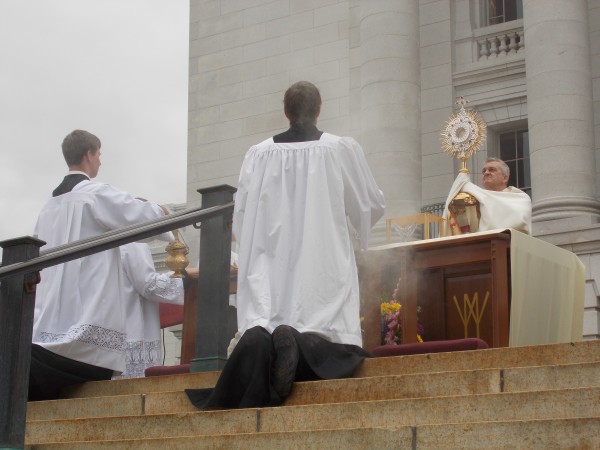 Reposition of the Blessed Sacrament

The Blessed Sacrament is carried past Grace Episcopal Church. Prayer for Christian unity, by Blessed John Henry Newman:
O Lord Jesus Christ, who, when Thou wast about to suffer, didst pray for Thy disciples to the end of time that they might all be one, as Thou art in the Father, and the Father in Thee, look down in pity on the manifold divisions among those who profess Thy faith, and heal the many wounds which the pride of man and the craft of Satan have inflicted upon Thy people. Break down the walls of separation which divide one party and denomination of Christians from another. Look with compassion on the souls who have been born in one or other of these various communions which not Thou, but man hath made. Set free the prisoners from these unauthorised forms of worship, and bring them all into that one communion which thou didst set up in the beginning, the One Holy Catholic and Apostolic Church. Teach all men that the see of St Peter, the Holy Church of Rome, is the foundation, centre, and instrument of unity. Open their hearts to the long-forgotten truth that our Holy Father, the Pope, is thy Vicar and Representative; and that in obeying Him in matters of religion, they are obeying Thee, so that as there is but one holy company in heaven above, so likewise there may be but one communion, confessing and glorifying Thy holy Name here below.
Amen. 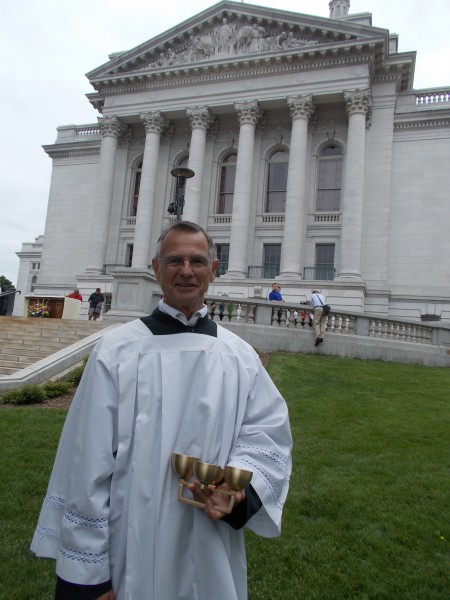 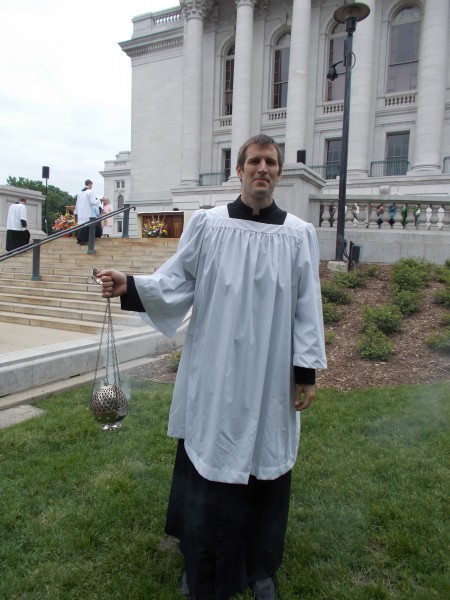 Seminarian Clint Olson, a medical doctor and a convert. See his vocation story on YouTube.

My friends Rhonda and Tina 🙂