The problem with Holy Wisdom Monastery

In the late 1950s and early 60s there was a Catholic girls’ high school just north of Madison, run by Benedictine Sisters (historic photo above). Times changed, the school closed, and the Sisters, going with the spirit of the age, became very liberal. Eventually, the two remaining elderly Sisters (and a protestant woman who joined them) transferred ownership of their property to a corporation owned by themselves, left their vows and dissolved their Catholic monastery. Bishop Morlino did not oppose their choice, sad though it was, because their beliefs were really no longer Catholic, and it was better for them not to continue to represent their organization as Catholic. 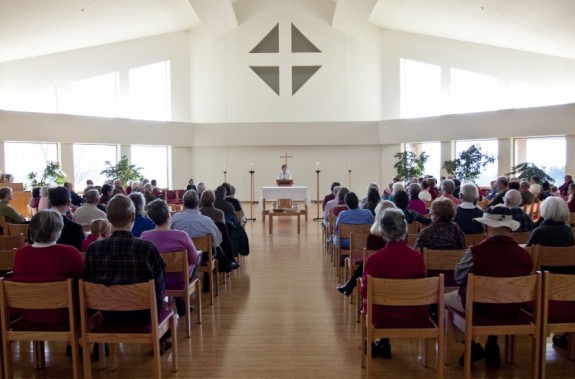 Today, their center, which they say is “ecumenical”, is re-named Holy Wisdom Monastery and hosts a lay-led “eucharist” attended by disaffected Catholics and protestants. When they make the sign of the Cross they prefer to say “in the name of the creator, and of the redeemer, and of the sanctifier.” In keeping with a “progressive Christian” trend toward pantheism, what they teach the children there resembles Hinduism more than Christianity. But appearances still do not destroy our hope that the Sisters will turn back, and that this place can someday return to the Church.

Nationally, Holy Wisdom Monastery is one of the most-watched instances of groups of women religious decisively rejecting Catholic authority and even “moving beyond Jesus” as described famously by Sinsinawa Dominican Sister Laurie Brink while she was president of the Leadership Conference of Women Religious. Locally, the errors of Holy Wisdom Monastery damagingly infiltrate the Church via the few active Catholics who quietly support them in spite of Holy Wisdom undermining Catholic faith and ecclesial communion. It is this “apostasy within the Church” and representing something as Catholic which really isn’t, that is more harmful than the existence of a non Catholic group that goes its own peculiar way.

It’s painful to examine this, because there are many local Catholics who have happy and loving memories of this place, and of the Sisters, from days gone by, and they deeply felt the loss to the Church. And I think we all felt that, even those of us who had never been there. This was the Sisters’ original Priory building constructed for a large number of Sisters who never actually materialized, then later a retreat center, now no longer extant:

The best source for understanding the Holy Wisdom Monastery situation is the statement on the Madison Diocese website on this topic. The blog of the Kansas City, MO diocesan newspaper has a helpful description of the facts of the departure of Holy Wisdom from the Church:

According to the National Catholic Reporter, Benedictine Sisters Mary David Walgenbach and Joanne Kollasch started thinking about leaving the Catholic religious life and starting a way of life the Church would not recognize in 1992. In 2006, they were officially released from their vows.

Between 1992 and 2006, they had a lot of work to do. According to public records, in 1998, they set up a Non-Stock Corporation headed by themselves called the Benedictine Women of Madison, Inc. The new corporation was non-canonical, ie., not connected to or bound by any of the laws of the Church.

In late 2000, the two sisters signed over the deeds for the various parcels of land belonging to their canonical, ecclesial religious order to the non-ecclesial corporation run by themselves. A separate, non-ecclesial foundation was also set up for the benefit of the new Benedictine Women of Madison, Inc.

When the two sisters finally were released from their vows in 2006, they had already transferred the ecclesial property of their order essentially to themselves. They took new vows to their non-Church related order and now run the Holy Wisdom Monastery on the property of their old order’s former high school.

Holy Wisdom Monastery has one other professed member, a Presbyterian minister. They are open to accepting “sisters” of other faiths, but so far no takers. Madison Bishop Robert Morlino has forbidden priests from offering Mass at the monastery, but in late August, they began “sharing the Bread of Life around a common table” at a weekly, inclusive, ecumenical Eucharist at their just-constructed $8 million eco-friendly monastery.

The Diocese of Madison statement explains:

It seems their choice to move in this non-Catholic direction was in the works for a number of years, at least since 1992 according to their website. During Bishop Morlino’s tenure, there were several meetings and conversations between the sisters and the bishop. There seemed to be a cordial dialogue taking place on a variety of issues and therefore it was a surprise when the two remaining sisters advised the bishop that they had been granted a release, by Rome, from their vows as Benedictine Sisters, in 2006. While Bishop Morlino was surprised, he was in no way unfriendly toward their desire to start a non-Catholic ecumenical community. He did however ask that they not reserve the Holy Eucharist or have Mass celebrated on site, so as not to cause confusion. Many people had visited St. Benedict’s Monastery over the years and the bishop felt it would take time for people to understand that it was no longer a Roman Catholic institution. They understood the bishop’s position and agreed to follow his directive for the sake of those who might be confused by the change.

Also in 2006, Bishop Morlino noted that engagement in ecumenical efforts would be suitable only for Catholic adults with a clear understanding of the teachings of the Catholic Church, and with a solid commitment to these teachings.

Clear understanding of and solid commitment to Catholic teachings is not a part of Holy Wisdom Monastery itself. The religious education curriculum for children used by Holy Wisdom Monastery is from the Center for Progressive Christianity, an organization I was very familiar with when I was a fallen away Catholic and political progressive involved with an online interfaith community.The  CPC actually discards all central doctrinal beliefs of Christianity, and “progressive Christians” tend to hold a a pantheistic worldview. A guiding light for them is the Episcopalian Bishop Spong who advocated Christianity evolving away from theism and belief in the supernatural, and indeed Spong has personally endorsed the CPC Children’s Curriculum. A Christian reviewer who examined the CPC Children’s Curriculum that they use at Holy Wisdom Monastery explains that although it mentions Jesus,

It is mainly written by Lorna Knox who is on staff at the Ananda Temple and Teaching Center in Portland Oregon. After looking at the curriculum, which includes religious information for both the teacher and children, it is clear that the material is religiously aligned with the teaching of the Ananda Temple which is a part of the Self-Realization Fellowship connected to the teachings of Yogananda, author of Autobiography of a Yogi. The religious viewpoint of the material, “A Joyful Path,” is a form of Hinduism.

Sadly the problem may go even further than lack of authentically Christian education. If Holy Wisdom Monastery were to baptize using their preferred feminist formula (according to the Wisconsin State Journal) “in the name of the creator, and of the redeemer, and the sanctifier”, that would not be valid Christian baptism at all, which was clarified explicitly in 2008 by the Vatican’s Congregation for the Doctrine of the Faith. This may not be at all a place where someone could be baptized and helped to grow as a believing Christian. What it is, is a congregation catering mainly to disaffected Catholics in their 60s and 70s. I have noticed that in many cases there is particular disagreement with sexual morality.

I actually ache for them, for there to be healing, mercy, happy reunion. The diocesan statement again:

In a fundamental sense, all who are baptized Catholics remain so forever by the indelible nature of baptism. However, an individual can compromise his or her full communion with the Catholic Church, by persistent refusal or denial of the Church’s definitive teachings; separating themselves from the sacramental life of the Church, and by refusal of ecclesiastical governance. Catholics who compromise themselves in such a manner from the Church are not in full communion with the Catholic Church, which has serious moral consequences.

Example: It is like being a member of a family. I’ll always be a member of my family, no matter how far away we grow or how estranged I might be from them. The beauty is that we can always come back home.

Sadly, Holy Wisdom Monastery enjoys substantial support nationally from dissenting Catholics, especially dissenting religious, for whom they are even heroes for “going non canonical”, escaping the Church authority which, as their beliefs evolved radically, they had come to feel so estranged from. It was a monk of Minnesota’s very liberal and very troubled St John’s Abbey, Fr Dan Ward (link describes disturbing and credible allegations of sexual misconduct and involvement in abuse coverups), whose organization the Resource Center for Religious Institutes actually shares an office building with the Leadership Conference for Women Religious, who gave the Benedictine Sisters canon law assistance and other help in transferring the deed for the property to the private corporation owned by themselves, and being dispensed from their vows, and has since then even given a workshop on this process for other religious who might want to do the same.

Ward is not the only St John’s monk to support Holy Wisdom Monastery; in late 2011 Brother Paul  Richards, under a cloud of some kind of misconduct accusation himself, took a lengthy sabbatical there in spite of Holy Wisdom not actually being Catholic and the Sacraments unavailable  there. As recently as Christmas of 2012, Father Robert Koopman of St John’s, who was the last president of nominally-Catholic St John’s University prior to it being severed from the monastery and transferred to a private corporation, visited Holy Wisdom Monastery, where they enjoyed his piano talents. From the January Holy Wisdom Monastery newsletter:

Other supportive visitors include certain Sinsinawa Dominican Sisters such as the very same ones Bishop Morlino recently said may not give workshops or spiritual direction in parishes, and at least one local parish staff person. And soon, Sister Simone Campbell, head of the NETWORK Lobby Nuns on the Bus, will be there this month, February 13 and 14 for an Ash Wednesday Service where she will actually give a reflection, and participate in fundraisers jointly for her organization NETWORK, Holy Wisdom, and a local pro-union group Interfaith Coalition for Worker Justice which I notice apparently has little support from local Catholics due to their pro abortion politics (according to comments from the organization’s participants, at that link).

It is so sad to have an out of town big name religious come here to actively take a part in a service at this place that departed from Catholic beliefs so publicly and left the Church so famously, and caused such a lot of pain and sadness to ordinary practicing Catholics here in Madison. Doing a joint fundraiser with them?! While I think there continues to be love for the Sisters personally, the local Catholics know very well not to support Holy Wisdom Monastery. Please leave a comment or send me an email if you want to join me in speaking up about that.

20 Responses to The problem with Holy Wisdom Monastery