With the Church’s silly season on the wane, thriving orders of Sisters and Nuns are wearing habits again. After many years of plainclothes priests who would put on a clergy shirt if they had to, recently the Vatican Secretary of State issued a letter, on directions from the Pope, reminding priests and bishops working at or visiting the Vatican to wear cassocks at all times, befitting their identity as priests conformed to Christ, and giving good example to other priests in the wider world.

What about the Catholic laity who threw off the standards of modest dignity in dress, who went along with the fashion herd of the sexually-depraved secular culture? It’s not only a matter of identity (though it is that too), but for the laity in particular an urgent moral matter. Modesty is protective of chastity, our own and others’. I think little Blessed Jacinta of Fatima’s statement is worthy of belief: “the sins which bring most souls to hell are the sins of the flesh.  Certain fashions are going to be introduced which will offend Our Lord very much… the Church has no fashions; Our Lord is always the same”.

At church I know I am not the only one pained if there are immodest readers or Extraordinary Ministers of Holy Communion. But one particularly sad trend has been immodest wedding dresses, perverting the symbol of the bride’s purity, her white dress. How is it that many a Catholic bride doesn’t even blush to approach Our Lord for Holy Communion in a strapless or low cut dress? Or put her bridesmaids in short cocktail dresses? Are they not bold to presume Jesus will not be offended? Up until 1983, canon law directed priests to deny Communion to immodestly dressed women. The fact they don’t now doesn’t imply it ceased to matter.

What I think people need to know is this:

Modesty is protective of chastity, our own and others’. We must not give occasion of sin to others. Many women don’t realize how men are looking at them and what they are experiencing and thinking. Modesty is a virtue with great relevance in our time, when sexual immorality is epidemic.

Modesty is not just completely relative and culturally conditioned. The Church is not entirely silent on standards of modesty. The basic version: shoulders covered, no low-cut, skirts (or pants) well below the knee. This dress code is posted at the Vatican and is enforced, not just at St Peter’s Basilica, but throughout Vatican City (see the sign at the top). Modesty is not just for formal occasions or at Mass, but is for all the time.

Vanity, excessive concern to follow the fashions of the world, or desire for the wrong sort of male attention can lead women into temptations against modesty (though make no mistake, modesty is for men too, even though I speak more of women). Understanding and respecting one’s own and others’ intrinsic dignity is part of what helps correct that, but simply following the Catholic standard of dress on the Vatican dress code sign would also help.  Some people fear they would look “old fashioned” or too different, or more separate from the world than is proper for laity, not relevant and vitally engaged, if they followed the standard of modesty. I think we need to push back against that idea, modest dress is not outside the range of how people dress today in our culture, and courageous modesty should be an aspect of your warfare against the world, the flesh and the devil. Let it be your battle garb, as it was our mother Mary’s when she crushed the head of the serpent, the devil.

About a year and a half ago I started wearing long modest skirts every day (I am not going to tell you you cannot wear modest trousers). I’ve had total strangers randomly come up to me and thank me for dressing modestly–more than once. Believe it or not, the homeless people at my volunteer job seem to like it–maybe they feel respected. And perhaps similar to the curious fact that even when a newspaper or magazine article is about LCWR Sisters who never wear habits, the accompanying photograph is usually of traditionally habited Sisters or nuns, I speculate that the WI State Journal found me very Catholic looking in the picture below from the Rosary Rally that they published.

But please consider, modesty has a relevance to making visible our Catholic identity, and as the “habit” of a chaste lifestyle in whichever state of life, and relevant to the kind of beauty that can be fruitful for the new evangelization. And I know I said don’t follow the fashion herd, but habits are “in” again! 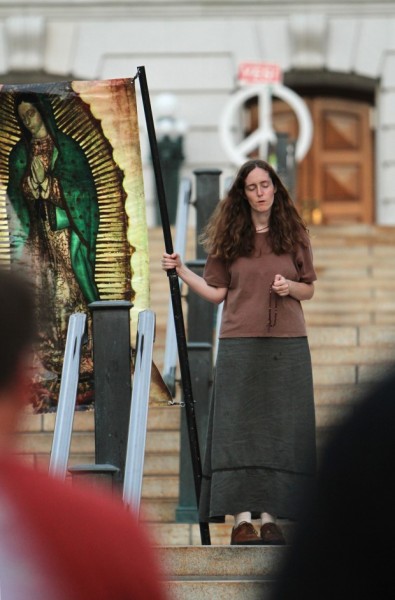 This is youth oriented, but I especially love this one: