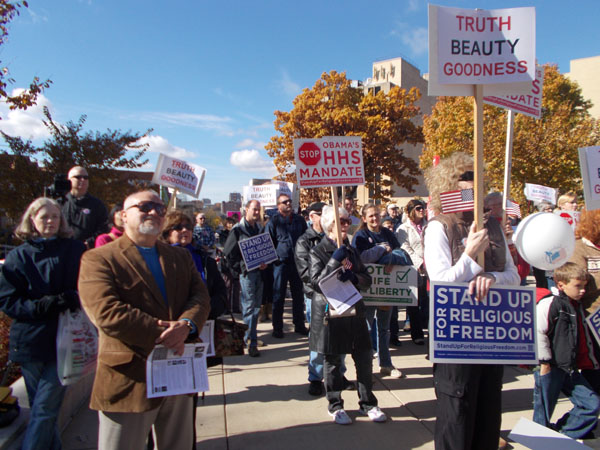 Today was the third Stand Up For Religious Freedom Rally that has been held in Madison, as part of a national movement. This time it was during the Farmer’s Market on Saturday at noon at the State Street Steps of the Capitol where on Thursdays we have the Rosary Rally.

Several different key things went “wrong”, and yet everything wound up going so right, this was my favorite Stand Up Rally yet. Even the people protesting against us were unusually friendly. Truly a beautiful day, and there was a spirit of joy and gratitude to God. 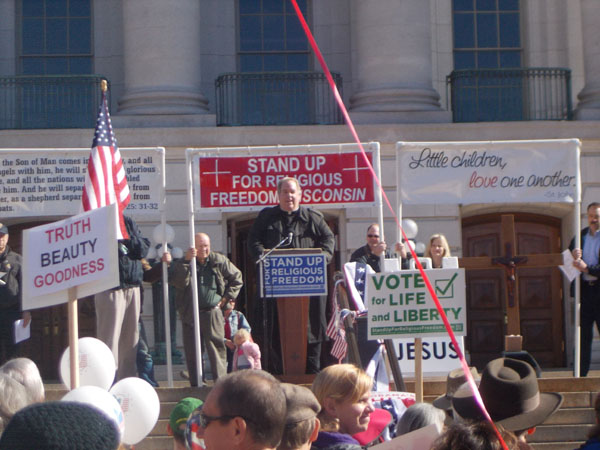 Fr Rick Heilman hurried downtown to be a substitute main speaker after something urgent came up that our very beloved Bishop Morlino had to take care of prior to an afternoon Mass to confer the Sacrament of Confirmation at one of the parishes. I feel like this priest is uniquely building up faithful laity taking initiative themselves for the mission of the Church. Some other truly good priests, who indeed share our concerns, relatively weakly supported our religious freedom initiatives, explaining “the Supreme Court will overturn the mandate,” or “it will become moot immediately after the election”. Either or both of those could be true, though I was a little startled by the apparent complacency. But I was more astonished they didn’t think more of this as lay witness to the Faith, part of the New Evangelization, and a means of educating and forming the laity to value conducting our Catholic organizations and businesses in real and courageous keeping with Catholic fidelity, which is an even bigger witness and force for good. Fr Rick has been totally with us on this, though. He also has a great initiative for the Year of Faith to build up the laity in the life of grace and spiritual strength in God, to be (peaceful) warriors for Christ: the God Strong Challenge, which is based on his recent book. 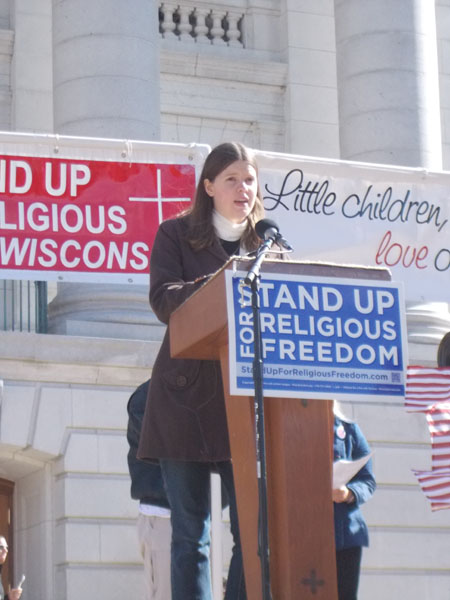 The heroine of the rally, if you ask me: Miranda is a lovely, quiet and graceful young married woman from St Paul’s University Catholic Center, who gave a compelling testimony why she’s absolutely against the contraceptive mandate. Miranda got involved with our religious freedom group that wound up planning the 2nd Stand Up For Religious Freedom Rally, then for this rally (which had a different planning team) she contacted the organizer, Del, asking if she (or maybe someone else, she is shy!) could read a letter associated with an online petition, “Women Speak for Themselves“, objecting to those who very falsely claim to speak for all women on women’s health issues, in order to deflect attention from the serious religious freedom concerns at stake. She preceded this with a testimony in her own words. So perfect–and VERY well received. I and Kristin the Pro-Life Wisconsin intern went through the crowd gathering dozens of women’s signatures to add to the “Women Speak for Themselves” petition.

Deacon Jack Fernan, in the center, was another substitute speaker, but he is sure no second-best, but a spiritual dynamo, and what he had to say was powerful and got a tremendous response of cheering, not least for his words thanking God that we are so blessed to be persecuted! Deacon Jack is a friend to so many, and absolutely as much so to the poor as to the unborn.
On the right in kilt is Del Teeter, very capable rally captain and emcee–and proud dad of one of our diocesan seminarians. 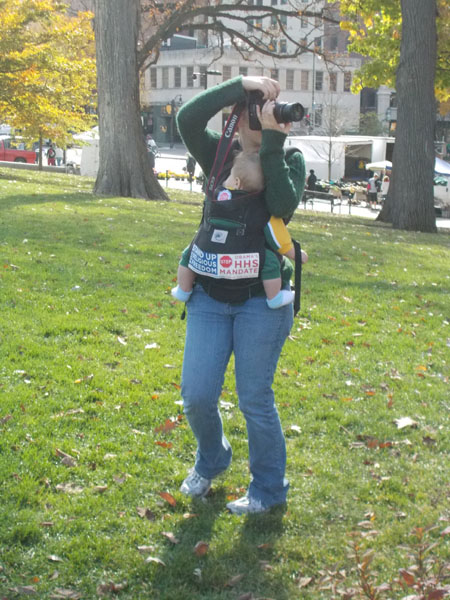 I think this is adorable. Kat Wagner of the Madison Catholic Herald was on the job, with Baby D. You can see the Farmer’s Market getting wrapped up in the background. 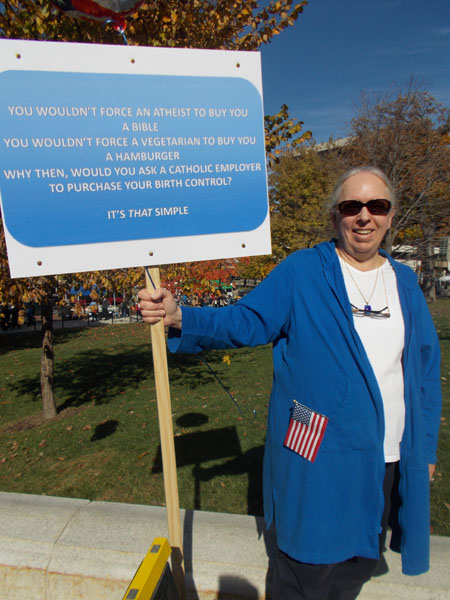 Great blogger Syte Reitz explains it all (and she has her own post up already about the rally). Her multi-talented son Tom, who just redesigned the Cathedral Parish website IsthmusCatholic.org, is also the creator of the now WORLDWIDE RosaryfortheBishop.org, was also there taking photographs. 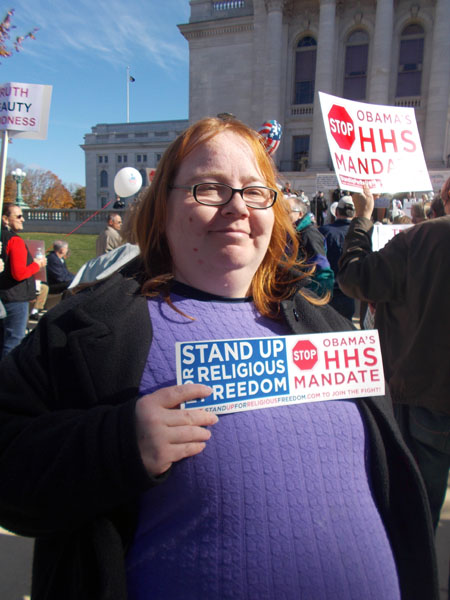 Another so lovely friend, Tina T. Although she is a private person, I hope she will not mind me saying I have perhaps never met anyone who explains more irrefutably the harm contraception does to women, about which so many are so deceived, and the great good of the Catholic Church’s defense of the moral truth and the dignity of woman, and what a refuge the Church really is.

Last but not least, Jeanne Breunig “parked illegally” right up next to the Capitol and showing off her pro-life badge (actually she had permission to be there, to pick up rally materials). Jeanne is a huge force making stuff like this rally happen, and she spreads a lot of happiness around because she is always bubbling over giving all glory and praise to God for all His goodness and kindness and joyfully thanking Jesus and Mary and many various angels and saints!!!

One Response to Joyful for Religious Freedom