How real is American life?

I found myself lying awake last night thinking about agricultural subsidies, and how they affect our lives. This is a subject I am very ignorant of, and knew and thought nothing about before Monday. I took the picture below on Monday in the room next to the little chapel at the Catholic Multicultural Center on South Park Street in Madison, and Secretary of Agriculture Tom Vilsack is giving a press conference announcing $101 million in grants/subsidies related to vegetable, fruit, and nut farming–“not just corn” as the person I asked at the event told me, after I arrived near the end (missing the main presentation). Vilsack is a Catholic and a former pro-abortion Democratic governor of Iowa, and his wife is currently running for Congress on a pro-abortion and pro same sex marriage platform. 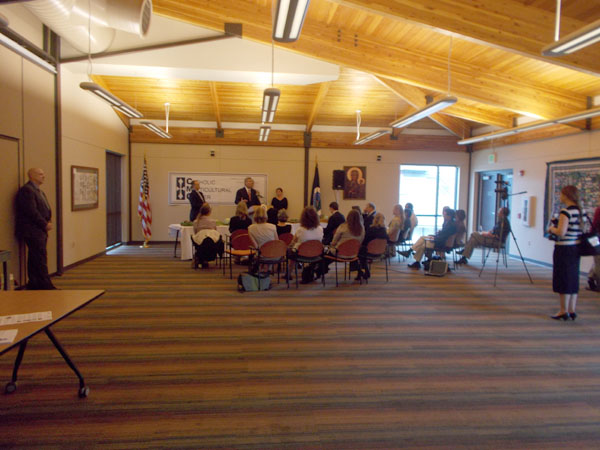 According to the WI State Journal,

Two grants totaling about $6 million were awarded to UW-Madison. One focuses on encouraging more farm-to-school programs like the Research, Education, Action and Policy Food Group’s farm-to-school program, which supplies area schools with fresh, locally produced fruits and vegetables that it prepares and processes at the Catholic Multicultural Center.

Secretary Vilsack toured the kitchen of the Multicultural Center to see veggies being prepared to be sent to schools (Based on REAP’s site, I think this is for a snack program that educates kids about vegetables), prior to his press conference. The people present at the event were mainly people involved with the Farm-to-School program, a few members of the press including Kat Wagner of the Catholic Herald, and Vilsack’s staff and Secret Service detail. Why this was going on at the Catholic Multicultural Center puzzled me somewhat, but this line from the same article suggests why Secretary Vilsack was touring around farms, the CMC, this week’s World Dairy Expo here in town, etc, with press following him: “all that grant money is on hold until a new farm bill is passed.” The apparent intent is to advocate for Congress to pass the massive bill. The $101 million turns out to be a tiny part of the farm bill. The first random thing I come to via Google gives me a sense of it:

In fact, if the conservative wing of [Speaker of the House John Boehner’s] caucus wanted more cuts to food assistance programs — a claim they made in denouncing the House Ag Committee’s 10-year cut of $16.5 billion from food stamps in the bill’s $969 billion of overall spending — Boehner could have delivered that chance through the amendment process during floor action.

Another thing jumps out at me: food stamps. This I do already know about, having been on food stamps for several years, $148 per month until very recently when I voluntarily got off it. The woman on the phone was surprised I was giving up that much free money ($1776 per year) and counseled me I could easily re-activate it. I assured her I know I have no need because for quite some time it had simply been subsidizing my lifestyle and my giving to Church and charity. The FoodShare or SNAP (food stamps) program actually gives grants to organizations to sign up new people for the program, with a stated goal of signing up everyone eligible, even though not everyone eligible is actually going to go hungry without it. Second Harvest Madison, which presumably got that grant, asserts on their webpage full of reasons why people who aren’t necessarily actually food-insecure should definitely sign up for FoodShare, that someone like me who could get this free money but doesn’t is simply being foolish: “Being eligible for FoodShare Wisconsin but not taking advantage of it is a lot like walking past $20 or more month after month after month.” Although I care deeply about people having what they need to live (actual hunger relief), I completely do not believe those (like Sr Simone Campbell) who say it’s inhumane to cut the food stamps budget and people will starve if it is trimmed at all.

But the Democrats very much expect votes in repayment for the food dollars and other largesse. In fact they think voters are stupid who could get all these various subsidies and don’t vote for the Democrats who champion them and who have a special bewildered contempt toward those who put their moral and religious convictions ahead of those financial interests to vote pro-life and pro-marriage! I was an active liberal/progressive at the time the book of Democratic strategy on this topic What’s the Matter with Kansas? came out (not anymore). I assure you they aggressively use all manner of wasteful pork and handouts for electoral purposes (and let me be clear, I am not saying all of the food stamps money is waste).

What I lay awake last night thinking about, was that I’d learned that even though I’d just given up FoodShare, my and every other American’s food bill was still being subsidized in a big way by the government. It’s said that without subsidies, American produced milk would cost us $6 a gallon and meat about 4 times what it now costs. Is that true?! Is that the meaning of the $969 bill farm bill?! I already knew if people ate less of those foods then we could feed vastly more people with the existing farmland, and I’d wondered dimly why it was that in practice it isn’t actually much less expensive to eat a diet with no (or, less) meat or dairy (objectively it IS much less expensive). The chart below (source), comparing subsidy funds to USDA eating recommendations, is food for thought. So I lay awake thinking, is the lifestyle Americans are accustomed to consistent with reality? 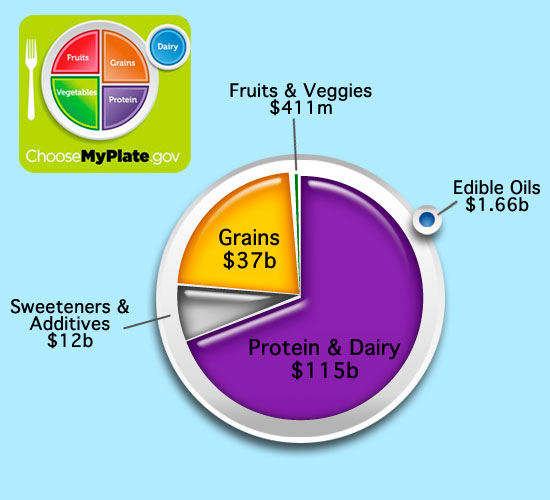 Is this not being paid for not only by taxes but by going into debt to countries like communist China? And are we not avoiding reality even further by massive implementation of contraception and abortion?
Here’s something else nobody seems aware of: in Wisconsin, and probably many other places, food stamps and free birth control (a national program that has been destroying married family life among the poor since the 1970s) use the same eligibility process and casework staff. I was signed up for the “family planning” coverage without even requesting it, at the same time I signed up for food stamps. Others I know had the same experience. I was able to get out of it by sending a letter requesting that and following up a couple times by phone to insist. The Planned Parenthood-affiliated Guttmacher Institute brags on the cost savings for government programs for the poor, due to this free birth control (and now free sterilization and abortifacient drugs too) keeping down the numbers of poor people.
So I lay awake thinking, what would America be like if we didn’t have subsidies for all manner of things (and what is FoodShare if not making the already large food subsidy 100% for many Americans) shaping people’s lives and consumption in all sorts of ways, if people didn’t contracept or abort their children, etc etc, I realize I know so little what is really going on under the surface of our country and why things are as they are. How real is the America we think we know?

I got to know someone from a developing country a few years ago, a lady from the tiny west African country of Gambia whom I tutored in English and who became a friend. She told of the hard labor of farming rice and vegetables, and of catching their own fish in the river, of having their own milk cow which they boarded on a nearby farm, and meat as a relatively minor part of their diet. Joy in family and children unlike almost any I see here in America, with the “baby ceremony” the main community celebration, but with a background of loss of many loved ones who did not have benefit of good American health care, and serious danger of death in childbirth. She lost her first child a few days after a very difficult labor.  In America, her life was saved by C-section of her third child, which would have been completely unavailable in Gambia. In America she prefers dishes of rice and meat without much vegetables. She takes contraception, and when we saw on TV children starving somewhere from war and drought, to my sadness she blamed lack of birth control. When this American solution that made life easier becomes available, the joy in family and children gives way quickly to a cold pragmatism.

There is no sugar-coating it, life in Gambia, which even has the excellent benefit of being a peaceful place, is in so many ways far more difficult. But I was fascinated because it seemed to me somehow so real, in a way that in some sense America as we know it, massively engineered through government, through technology and pills, etc, does just seem artificial. Unsustainable. Can we be “real”, and ALSO have medical care so childbirth isn’t a life and death ordeal, and nobody’s beloved dad dies too soon of treatable diabetes, and make sure if there’s a drought or someone is disabled or frail elderly they will not starve?

Last night at the Spirit and Truth young adult group at the Cathedral Parish, we were discussing the New Evangelization, and Monsignor Holmes was asked what about Catholicism was particularly attractive to today’s society. He thought briefly and said, “genuineness”. I think there’s a lot in that response. Catholicism is sincere. It is real. Real relationships founded on virtue and the truth, real married family life without contraception, and yes I do even think a disciplined approach to food, including temperance in general and also fasting and abstinence from meat (and during Lent by ancient tradition also from other animals foods, sugar and oil) much more than most Catholics today are used to, is also traditional. And we don’t have to sacrifice life-saving St Mary’s hospital to have a lot of the good that is found in traditional cultures; St Mary’s Hospital is Catholic (and may it be very authentically so).

This is quite a rambling post from my scattered brain, which others will doubtless have criticisms of, and more information to supply, but I think it ties together like that: I don’t know much about the farm bill really, and this is surely one of those “prudential judgement” things that there’s not really a clear cut Catholic “position” on, but I do have a notion that the Catholic faith does contain within it the wisdom that can make our beloved country better and more, well, real. Not far-fetched since Jesus is the Way, the Truth and the Life. If you have qualms about what I’ve been saying, it’s probably because this way to make America better does actually involve the Cross. Marriage, chastity and not contracepting is the cross. Sacrificing some preferred foods is a little bit of the Cross.

The Cross: true wisdom for America, and we don’t have to wait for a government program, but be more deeply converted in Christ.