Stand Up for Religious Freedom Rally

Please join us for Madison’s second Stand Up for Religious Freedom Rally at 12 noon, June 8th at the Kastenmeier Federal Courthouse, at 120 North Henry Street! (map)

“Time is running out, and our valuable ministries and fundamental rights hang in the balance” ~ Cardinal Timothy Dolan, President of the United States Conference of Catholic Bishops.

What grave threat could there be to our apostolate as Catholics in America; what fundamental rights of Catholics are in such great jeopardy to merit such a strong statement?

It is nothing other than the unprecedented assault on our religious liberty by the Obama Administration, in forcing us to accept a Health & Human Services mandate requiring Catholic institutions to offer health insurance plans that cover contraception, sterilization and abortion-inducing drugs – a violation of our First Amendment rights as Americans; but more importantly, an action that would force us to reject our Catholic Faith and the teaching of Holy Mother Church.

On June 8th, join Catholics from all over Wisconsin who will meet at the Kastenmeier Federal Courthouse in Madison, from 12pm to 1pm for a Stand Up For Religious Freedom Rally.

The battle of our time is before us – and time is running out – will you Stand Up For Religious Freedom?

Please visit http://standupforreligiousfreedom.com/ for details on the Madison Rally on June 8th.

Defend your Faith, the Culture of Life, and Stand Up For Religious Freedom! 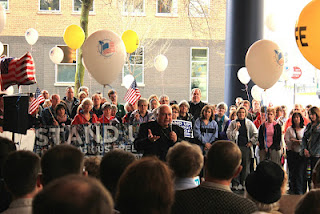 About Madison’s previous Stand Up Rally on March 23rd:

500 people attended the first Stand Up for Religious Freedom Rally in Madison.

Bishop Morlino’s excellent remarks at the March 23rd rally are available as an MP3 audio download.

There are photos of the March 23rd rally at Syte Reitz’ blog.

And here is a video of the nationwide rallies:

One Response to Stand Up for Religious Freedom Rally