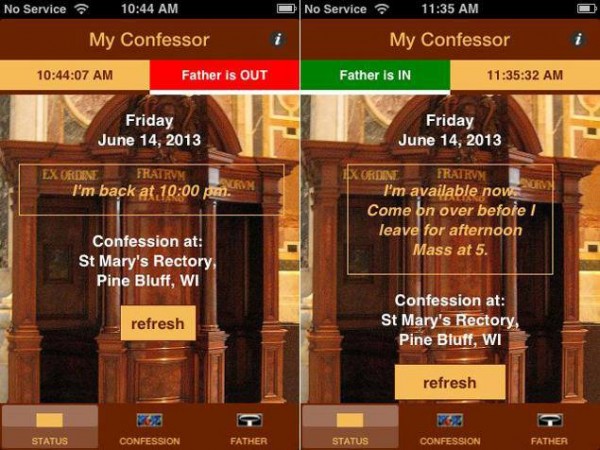 Father Rick Heilman, whose 25th ordination anniversary party I just shared pictures of, is in the national media, including the New York Daily News and Fox News, with his initiative of 24/7 Confession. He’s installed a confessional (that links to Fr Z’s post about this with photos) just off the vestibule of his rectory at St Mary Pine of Bluff Parish (Google Map), across the hall from a private chapel with the Blessed Sacrament. There’s a smartphone app to find out when he’s available. His status can also be viewed online, at MyConfessor.org–he’s in right now, as I write this! Fox News says:

Got a hankering to repent? There will soon be an “app” for that.

A Roman Catholic prelate from Wisconsin will become the first priest to log on to a soon-to-debut smart-phone application that seemingly renders the good ole’ fashioned church bulletin as outmoded as medieval indulgences, the New York Daily News reports.

According to the paper, the so-called My Confessor App will allow the faithful to keep up digitally with when their local priest is hearing confession, or the sacrament wherein Catholics recount sins to a “confessor” who , in turn, doles out penance, usually in the form of prayers.

“I want people to not feel uncomfortable asking about confession,” the Rev. Richard Heilman told the paper. “We want everybody ignited in the Holy Spirit.”

Fr Rick is also the organizer of the weekly Capitol Rosary Rallies, about to start up again. Bishop Morlino joins us this Thursday June 20 at 7pm on the State Street steps of the WI State Capitol, for a vigil kickoff of the Fortnight for Freedom.

[update: the story about Fr Rick’s MyConfessor app has been picked up also by Business Standard, and even gone international, appearing in news sites including The Times of India, Greek Herald, and Irish Central the latter which is even encouraging people to donate to the effort via the Knights of Divine Mercy.] 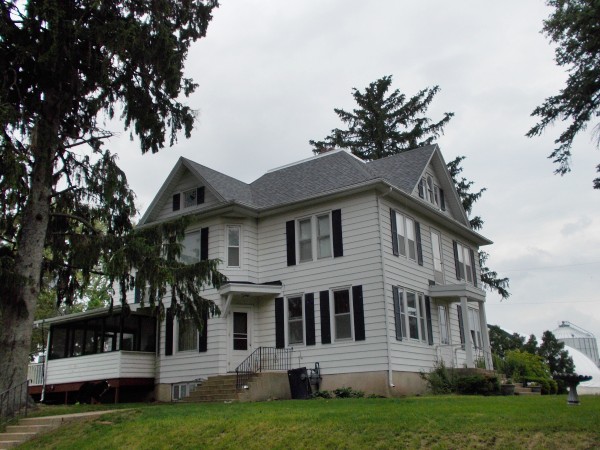 The St Mary of Pine Bluff rectory, viewed from near the church. To go to confession, enter at the front, to the right side of this picture.

One Response to MyConfessor: Father Rick’s app of Divine Mercy