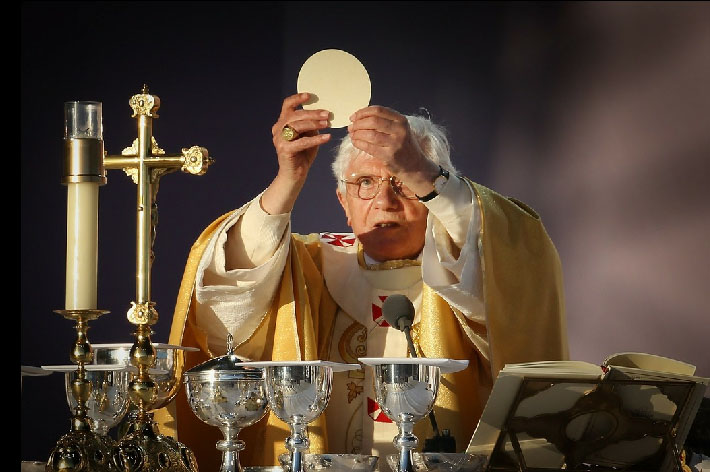 A friend asked me today to comment on today’s remarkable news of Pope Benedict XVI’s resignation at the end of this month. I have not had time to blog all that I’ve meant to blog in recent days but I can easily post this:
As to myself, I am definitely surprised, and my sadness is full of a lot of love for Pope Benedict. I wasn’t so sure about him when he became Pope, but what a sweet and brilliant man; we have no better theologian today. He was actually looking forward to retiring soon, at the time that Blessed John Paul II passed away and he was elected Pope. God had other plans and he served heroically and very well. One thing that makes me less surprised than I might have been is the veneration that Pope Benedict has shown toward a medieval Pope who is famous precisely for abdicating shortly after his election, citing his weakness and the difficulty of the job and perversity of the people: Saint Celestine V. Benedict visited his tomb more than once, even leaving his archbishop’s pallium on the tomb. Now that devotion to Celestine V, whom he must have prayed to intercede for him to have wisdom about when and whether to make such a choice, seems very significant. Blessed John Paul II remained Pope through such visible illness and suffering and gave a witness like the crucified Christ, but Benedict’s emphasis of the physical and mental capacities to be able to do the job is also highly important, and was doubtless brought home to him even more by some of the difficult things like “Vatileaks” that he had to contend with. In our day so much is required of a Pope. I will be praying for Pope Benedict and a wise choice of his successor.