After I posted my story of having formerly been a very active political progressive, and how I came back to the Church and had to radically re-think some things and leave progressivism, some people wanted to hear more. I don’t know if this was what they were asking for, but while I as going through my files I came across this graphic that I must have found via Daily Kos some time around 2004 or 2005, and saved to my hard drive: the liberal master plan! Well, sorta! Well, you can pretend it is! You need to click it to see it full size. I googled some of the phrases in this chart and found it was more than likely made by a blogger named Dave Pollard, who was interested particularly in environmental philosophy (for me, too, it was actually first environmental concerns that got me engaged with progressivism). While this particular chart does not appear to originate in the corridors of power, it is certainly the type of thinking that liberals in the corridors of power are engaging in. And of interest to those who read this blog, not even only the big politicos but the rank and file including the liberal religious Sisters.

If you think about it a minute, it could be called a utopian plan, with the two lighter-green boxes the ultimate goals: “Healthy communities, healthy world, end to suffering”, and “Stability and diversity of all life on Earth.” Sadly the proposed means to those ends, as with other utopian schemes such as Naziism and Communism, are evil. To cite only the most egregious problem, population control via contraception and abortion is a linchpin of liberal “systems thinking”. 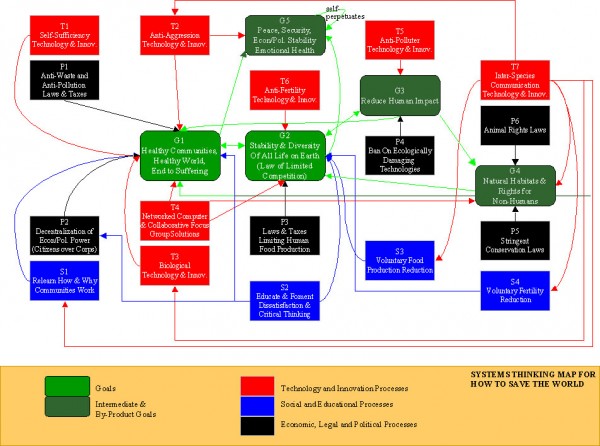 Click the image to see it full size and read it more clearly.

Not all the progressives would agree with all of this, for instance although it’s pretty fair to say they are all for “voluntary fertility reduction”, they aren’t all for “animal rights”, though the amount of traction that notion has was brought to my attention recently when the liberal Sisters in the “Call to Action” linked film Band of Sisters repeatedly brought up the idea that “all the components of the earth” have rights (quite regardless that it’s inconsistent with Catholic beliefs). Those Sisters are also actively engaging in “systems thinking” of this kind, and they like to talk about the importance of “systemic change”–a theme I also brought up last year in a big post concerned about the Society of St Vincent de Paul. Another parallel was that the stated goal was actually to end poverty, and in the above chart a part of the goal is to end suffering. But these are quite simply not valid goals in this life for the reason that we know they are not possible in this life in this fallen world. We are gravely obliged to love others, to serve Jesus in the person of the poor, to care for the suffering, but we have it from Jesus in the Gospel: “the poor you have with you always.”

By the way, if you’re thinking Pollard’s plan cannot possibly work, he concluded that himself in a complicated post last September. I think the way we can know this plan will fail is simpler, and is like what a friend said to me the other day, that Pope Pius XI knew Communism would fail: because it was evil.

It’s not that I trust the other political “side” to have all the answers. As far as I know, it’s a fact that world oil production (to which economic growth has correlated so closely) will peak and then begin to decline, while energy needs will continue to rise–and the other political “side” doesn’t appear to have a plan about that, not even an evil plan. I grew up truly anxious about these kinds of questions, and the fact I have never driven a car, haven’t eaten meat in 14 years or so and on Fridays and during Lent abstain also from dairy and eggs, live in a small efficiency apartment, recycle diligently, prefer used clothes and household goods, etc, is not entirely a coincidence. I live in this way very contentedly without saying everyone simply must, and now without anxiety.

The most fundamental thing is not to envision how “systems” work and then go all-out to engineer change in hope of eliminating all suffering (or alternatively, despair and then just try to have fun while our time lasts, which is actually Dave Pollard’s suggestion). The most fundamental thing is to tend toward holiness, to accept suffering for Love’s sake, to live virtue and love God and our neighbor, to die a Saint. I have no anxiety about it all now because God has a better plan for our good, O YES our good even in this life, than the technocrats, and it will be effected (no not through the “magic” of the free market) through personal holiness.

One Response to Revealed: the liberal master plan!