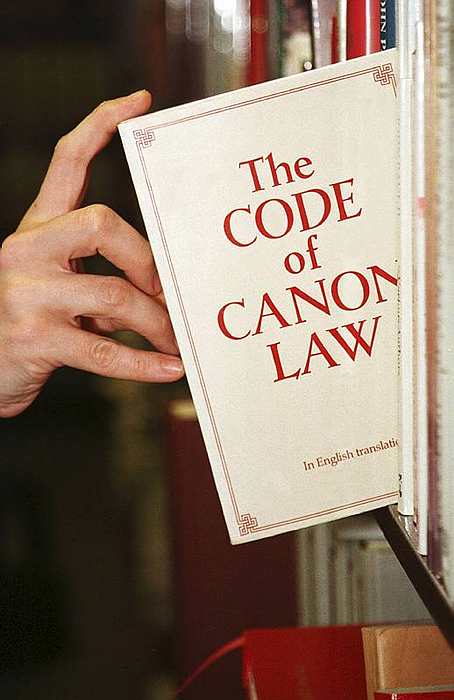 Very interesting diocesan news today: Bishop Morlino has wiped the diocesan slate clean of all the tangle of hundreds of local church laws. As of now, the diocese is governed simply by the Code of Canon Law, the internal legal system of the Catholic Church, without any laws specific to our diocese.

The Madison Catholic Herald has an article by Madison Tribunal judge Tim Cavanaugh on the decree of abrogation: Repealing laws you didn’t know existed:

Why would the bishop repeal all diocesan law? It was noted above that laws are meant to have fairly permanent application, but the law is also constantly in need of reform. Sometimes changes in the world make a given law obsolete. Other times, developments in universal law demand developments in particular law. And still other times, a body of law can gradually grow so disjointed, confusing, and even contradictory that it becomes difficult to interpret or implement. In each of these cases, the law no longer effectively fulfills its primary purpose of providing for the common good, and reform is necessary. A little diocesan history will show that all of these factors have hampered the effectiveness of the laws of the diocese.

In July of 1955, Bishop William O’Connor convoked a diocesan synod, a gathering of all the priests of the diocese to guide the bishop in formulating a body of diocesan law. In February of 1956, the bishop closed the synod by promulgating nearly 600 laws covering everything from the appointment of pastors to the minimum percentage of beeswax in altar candles. The synod’s decrees are still technically “on the books,” but they have long since ceased to be substantially observed. Some of them are comically obsolete; for example, decree 379 sets the salary of pastors at $1500 per year.

Others are not necessarily outdated, but they are simply not widely known or followed; for example, decree 245 requires all church bells to ring the Angelus morning, noon, and evening.

It is virtually impossible to locate laws that have been issued since the synod — if any were issued at all, that is. In the turbulent decades following the Second Vatican Council, the word “law” developed something of a bad reputation. On top of that, recordkeeping tended to fall by the wayside. Since there was no central repository of episcopal decrees, the only way to compile a corpus of diocesan law would be to pore page by page over 60 years of the Catholic Herald, where decrees were officially promulgated. Even then, the locatable decrees do not always make it clear whether the bishop was intending to promulgate new law, since bishops seemed to prefer to use other terms like “norms,” “directives,” or “guidelines.”

And leading canon law blogger, referendarius (advisor) to the  Church’s canon law “supreme court” the Apostolic Signatura, dad to Tom Peters of CatholicVote.org/American Papist blog, and professor to some of our diocese’s seminarians, Dr. Ed Peters, posted a heads-up about this yesterday and then a post commenting on it today: Follow-up on Bp. Morlino’s latest legal reforms. “It’s got the fingerprints of well-trained canonists all over it,” he says, complementing the work of our diocese’s new canon lawyers Fr. Tait Scroeder JCD and Mr. Paul Matenaer JCL.

There’s an especially interesting line about abrogating “[e]ach and every custom that is contrary to universal or particular law and that [] lies within my power to reprobate…” That line does what it should do (among other things, underscores the burden of proof on those asserting customs contra legem) without doing what it shouldn’t do (trampling over practices praeter legem that contribute to the good of the faithful, or, for that matter, pressuring the Legislator to pronounce on close cases). The timing for the decree seems obvious: in a few weeks we mark the 30th anniversary of the Johanno-Pauline Code and Canon 26 [that is: “Unless the competent legislator has specifically approved it, a custom contrary to the canon law now in force or one beyond a canonical law (praeter legem canonicam) obtains the force of law only if it has been legitimately observed for thirty continuous and complete years. Only a centenary or immemorial custom, however, can prevail against a canonical law which contains a clause prohibiting future customs.”] takes on added (not absolute, often misunderstood, but nevertheless added) significance.

Ed Peters is usually easy for the lay person to understand, but I confess not being 100% clear what all this means. I think he’s saying that the Madison Diocese has acted in a wise and timely fashion to prevent  longstanding diocesan customs from hardening into law, as we pass the 30 year mark after the 1983 promulgation of the current Code of Canon Law. Not every diocese needs to do this, but in our case they thought it through carefully and decided it would be wise not to risk staying stuck in 1983. Also, now there’s no basis to refer to some half remembered directive of a past bishop, when someone wants to continuing doing something after Bishop Morlino has given a different instruction that’s geared toward the health of the Church today. 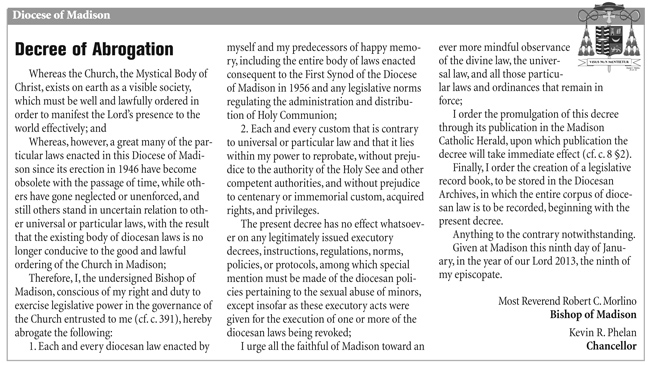 I happened to be at the O’Connor Center for noon Mass today, the same time as this was officially promulgated, and Fr Tait celebrated the Mass with Paul Matenaer as his server. Fr Tait sings very beautifully.