The latest splashed across the blogosphere is that Bishop Morlino talked in his homily last Sunday about the Mass celebrated ad orientem, with the priest facing in the same direction as the people. I was at that Mass, I liked what he said. He told us about Advent and the significance of looking east (as in Scripture, and as in that great Advent carol “People Look East”), waiting and looking for the sunrise, the coming of Jesus. The Lord’s birth was awaited and longed for in ancient times, and in our time we prepare ourselves and wait for Him to come again in glory. Then Bishop Morlino spoke interestingly about the traditional orientation of the priest facing in the same direction as the people, toward “liturgical east”, as he offers the Holy Sacrifice of the Mass. He’s sure the day will come when we do “turn toward the Lord” together, looking east.

But I want to tell you something else Bishop Morlino said recently that didn’t splash across the blogosphere. He spoke to a group of young adults in the Cathedral Parish’s “Spirit and Truth” program on October 10th this year, mostly about Vatican II, interesting details of what happened at the Council, and why there wound up being such a disconnect between what the Council documents say, versus what Vatican II was popularly but erroneously thought to be about, aka “the Spirit of Vatican II”. I don’t think this talk was recorded.

Here’s the big liturgical news: Bishop Morlino says rumors get started much too easily about what he is going to do next, and people get anxious, but actually he has no other major directives for liturgical change planned for his diocese. For instance, he is not going to ban Communion on the hand.

Bishop Morlino teaching about ad orientem worship helps people to understand that when they see it, and not get somehow piqued and offended. I think it likely that ad orientem will gradually, increasingly get restored. But I don’t think at all that Bishop Morlino is going to order it. He’s not going to order that we all kneel at the Communion rail and receive Jesus on the tongue. But you know, we may again some day.

The Cathedral Parish went on a bus pilgrimage earlier this year to sites in our diocese associated with the amazing missionary frontier priest Fr Samuel Mazzuchelli, whose cause for canonization is open. I became interested in the historic altars at the historic churches he built… ad orientem altars which some Sisters of the Sinsinawa Dominican Order he founded apparently consider unthinkable to be used now, because they face “the wrong way”.

St Patrick’s church in Benton, WI was built by Fr Mazzuchelli. Two Sinsinawa Dominicans are still in residence and on the staff there.  We were about to leave when I thought to point out (politely) to one Sister that a set of old altar cards hung on the wall in their little museum in Fr Mazzuchelli’s former rectory were arranged wrong, with the Gospel and Epistle sides reversed. I was surprised when she told me this was on purpose–because the altars have turned around now. I said, but that form of the Mass would never be celebrated facing the people, it would be illicit, only in the Novus Ordo is there an option to face the people. I attend the older form of the Mass every Sunday, I said (both forms actually), and the left is always the Gospel side, and the right the Epistle side. She looked stunned, was almost speechless. I want to emphasize I meant no disrespect. She tried to say why she thought the priest should not “turn his back on the people”, and I tried to explain about facing toward God together. Then I had to go get on the bus, I thanked her very much. These Sisters were formed by their time.

Here’s an undated postcard (a gift from those Sisters who showed us around–they had a stash of assorted postcards of their parish, which was actually the place of the founding of their Order) showing the interior of a little chapel addition to the church, into which was installed what had been the original high altar of St Patrick’s Church in Benton. I think I have seen somewhere an even older image in which this chapel had a Communion rail, but I cannot find that now. 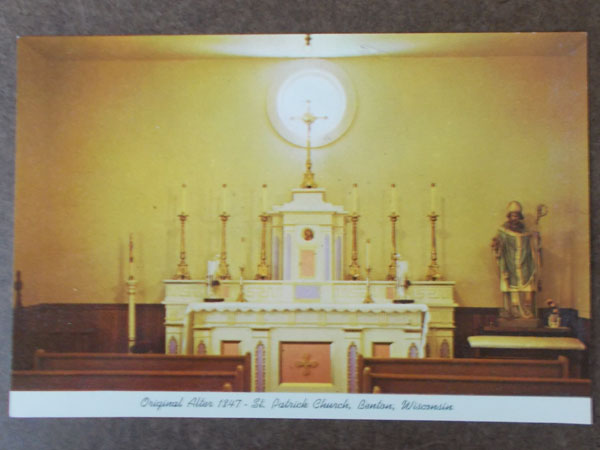 Subsequently the altar was restored lovingly to its original paint style, this is how it is now: 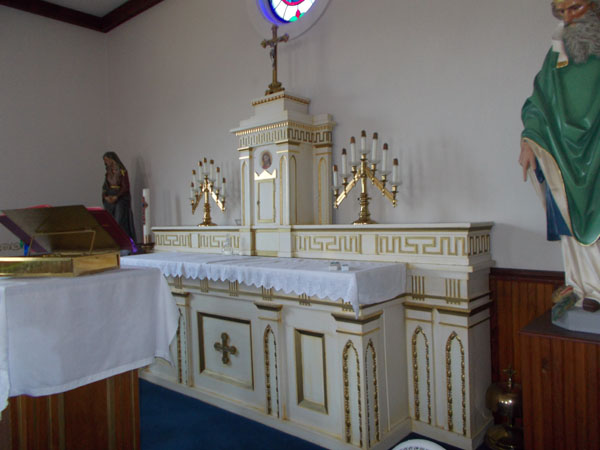 However, by then actually using the altar had become unthinkable by those in charge of the church. The chapel had to have an awkward little non-matching table altar.

Now here’s the scene at St Augustine’s Church in New Diggings, WI, also built by Fr Mazzuchelli and recently extremely lovingly restored in full and at great cost to its original state from frontier times, and maintained as a museum by the Knights of Columbus. This little church is amazing. Yes, the altar cards are placed correctly: 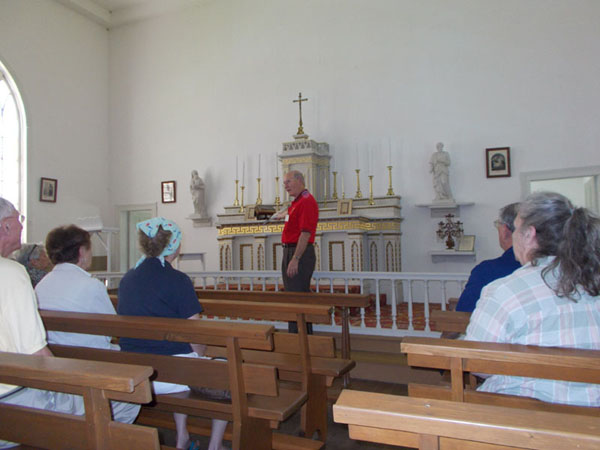 They used to celebrate an annual memorial Mass for Fr Mazzuchelli in St Augustine’s Church (more recently it’s celebrated in the main church–not that chapel the pictures are of–at St Patrick’s in Benton). During the pilgrimage we viewed a video on the bus ride home that had footage. Surely they used the altar, right? The extremely carefully restored altar the holy Fr Mazzuchelli built and used?

Oh no, my friends. They built a thing out of wood, about 3 feet long and at most a foot wide, to straddle the Communion rail. And then Mass was celebrated on that, facing the people. And then, of course, everyone received Communion on the hand.

I hope some day some dear priest will seek permission to go celebrate a Traditional Latin Mass in St Augustine’s Church. The altar does not have its altar stone but this place is beautiful.

One Response to People, Look East