Bishop Morlino on the de-facto religious beliefs of Americans 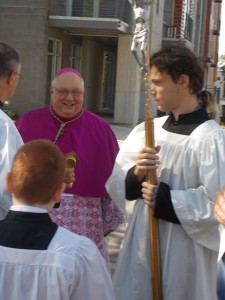 Bishop Morlino was on a secular conservative talk radio program, the Vicki McKenna Show, yesterday. I looked up a podcast of this program. His interview starts at about 20:00.

First, McKenna asks him about the “pathologically silly” belief that the world might end when the Mayan calendar ended, jettisoning their own core value system, to believe in  what amounts to magic.

Vicki McKenna: Let me ask about the risk of this though… so it’s whatever I want it to be, then. So if I make up my own rules then I’ve given myself license to say my rules are the rules MY religious entertainment experience tells me I should say YOU should live by.

Morlino: No, they usually don’t go that far, they just say leave me alone. This is very individualistic. At least they don’t intend to tell anybody else what to do.

McKenna: Well they seem to find ways to tell everybody else what to do. They seem to have replaced… the idea of God, they need that, people need it. I made the argument once, as a young person, (Brian?) would still accuse me of being a heathen, I made the argument to a sociology teacher that one of the things for society to thrive is faith in God. What do you do when you’ve replaced the guiding rules that your faith necessarily produces, with ‘anything goes’? What ends up happening is, you transfer the trust that you had previously placed in God, to a trust in a government structure, or in human groups, or in yourself.

Morlino: Well that’s a good point that you make. See, this Moralistic Therapeutic Deism can either lead one into a very individualistic mode, where one is looking for religious entertainment and is completely a ‘live and let live’ person. People that are really searching around in the religious sphere would go that way if their instincts are genuinely religious. But there’s another group of people, and of course we’re all influenced by peer pressure, there’s another group of people that when they go looking around in this context of Moralistic Therapeutic Deism, they move into a situation where politics takes the place of religion, and when they get into that sphere that’s when political ideology startsto dictate not only what they should do but what everybody else should do. But the subsitution of a political ideology for religion is very common in the United States, and it’s certainly very common in Dane County and in Madison, even with many Catholics. [I said something similar the other day in my post about the “Wisdom’s Well” Sinsinawa Sisters and the relationship between religious indifferentism and Progressivism]

McKenna: You know, as you say that I’m thinking, the Obamacare HHS Mandate orders the Catholic Church essentially to suspend its own belief system, its own rules, and replace those rules with an order of political ideology…. And an entire group of Catholics even, or even other faithful people who didn’t see I guess the fact it was going to affect the ability to practice their faith freely, cheered it on. I didn’t think I would ever live in an America that would cheer on the government taking away religious freedom from the Catholic Church.

Morlino: It’s a profoundly disturbing thing. I mean, that is what’s happening. And another undercurrent that’s accompanying this is forgetfulness of future generations, I mean, forgetfulness of the incredible debt that they will bear builds on forgetfulness of the worth of human life in abortion, and in the tendency almost to use every means to promote artificial birth control to limit the size of any future generation. So there is a neglect of care for future generations in terms of providing numbers, because of abortion and because of artificial contraception, and in terms of their well being, in terms of of handing down some spectacular debt. And these things don’t seem to be of much concern to many people, and they’re profoundly important because there is something dehumanizing about all of this. Even if someone is not religious they should have a great concern about the future of humanity.

(Amen, Bishop Morlino! there is more of the conversation continuing in the podcast from about 30:00)