The Rosary Rally in the newspaper, a Beatitudes-type blessing from the Freedom From Religion Foundation

The Wisconsin State Journal ran two articles by religion reporter Doug Erickson in yesterday’s Sunday edition, one on the Capitol Rosary Rally and one on Bishop Morlino’s defense of Paul Ryan as someone with a faithful understanding of Catholic social teaching. I was interviewed August 29th and my photo accompanies the Paul Ryan article in the print version. Doug Erickson approached me (and a few others) asking about Paul Ryan, and I said the rosary rally is not political and I will not talk about Ryan in connection with that, he said he was just looking for local Catholics, I agreed and we spoke off to the side. I’m quoted briefly in the article on Paul Ryan, for which Erickson also interviewed Bishop Morlino, and I’m happy to see Bishop Morlino’s teaching in the paper. 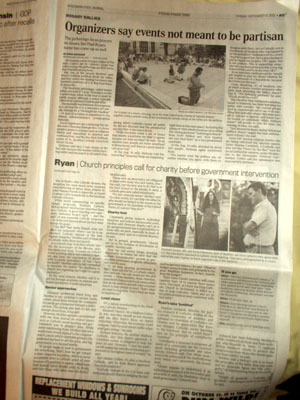 Page 11 continuation–the Ryan article starts on the front page. The photo on the left halfway down the page is Our Lady of Guadalupe and me. Next to that is Rich Bonomo, who was featured in an earlier article on this blog. He’s got the Holy Redeemer clock on the bell tower running again by the way, though it is running slow till he can upgrade the components.

The Paul Ryan article is titled “Madison diocese defends Ryan’s faith” in the print version, and “Catholics find fault and blessing with Ryan’s politics” in the online version.  The Rosary Rally article appears under the headline “Organizers say events not meant to be partisan” in the print version; online it is titled “‘Rosary rallies’ at Capitol thinly disguised GOP pep fests, critics say”. My impression of the articles was not very positive, especially under their online titles (the titles are not written by the reporter). But other rosary rally participants I’ve spoken with all basically liked the articles, or thought “they could have been much worse.” The consensus seemed to be they are fair and honest articles. The accompanying photos were praised. A bit of the rosary rally article:

An ongoing series of prayer rallies at the state Capitol led by Catholic clergy has critics saying the gatherings are little more than Republican pep fests.

But one of the priests involved said there’s nothing political about the rallies and that critics are reading too much into favorable mentions of U.S. Rep Paul Ryan, R-Janesville.

The hour-long gatherings, called rosary rallies, are held Thursdays at 7 p.m. on the Capitol steps. Most of the hour is spent in public prayer, although a priest typically offers brief comments before and after.

[…]At the Aug. 30 rally, attended by about 100 people. Heilman again mentioned Ryan.

“No matter what his politics are, no matter whether you agree with them or disagree with them, he’s a Catholic son in the diocese of Madison who was tapped to be vice president,” Heilman told the crowd. “And he’s a good dad, he’s a good husband, and he needs our prayers, OK? Again, this is not politics. This is supporting someone who has been given possibly a very big responsibility and he is our own, OK?”

The rosary rally article focuses quite a bit on the favorable mentions of local practicing Catholic and vice presidential candidate Paul Ryan by Fr Rick Heilman, one of the two holy and beloved priests who lead the rallies. However, Fr Isaac, the other priest and the one who had the initial idea for the rosary rallies, is more unambiguously not a partisan, however Doug Erickson didn’t speak with him. Fr Isaac said in a Sept 2nd homily at Holy Redeemer Church that one shouldn’t vote for any abortion rights supporter even if they “only” support a rape and incest exception such as Romney supports; Fr Isaac feels voting for any such candidate perpetuates evil. Fr Rick’s mentions of Ryan are considerably similar to and often based on perfectly fine things Bishop Morlino has said, for instance, that whether we agree or disagree with Ryan’s economic policies we should be proud of him as a gifted son of Wisconsin, and pray for him. I heard Bishop Morlino say that at Sunday Mass at St Patrick’s right after Ryan, whose pastor Bishop Morlino of course is, was nominated for VP (there’s an MP3 of that homily, though I don’t have time now to find the exact quotes).

The article notes that even Annie Laurie Gaylor of the Freedom From Religion Foundation acknowledges Fr Rick hasn’t told rally-goers to vote for Paul Ryan, though she still feels he’s “endorsed” Ryan. But this good priest hasn’t done anything illegal. Of course, FFRF could not resist the possibility of trying to “get” him for it in some other way, as you will learn if you keep reading.

Doug Erickson, the reporter, surprised me by calling this afternoon to respond to my relatively critical comments on the website version of the articles and explain some of the choices he made in writing the Ryan article. He’d taken my phone number at the time he interviewed me. This reporter, who was also the one who recently wrote a delightful front-page article about a terrific and fun young woman becoming a Catholic religious Sister, treated me respectfully and seems to have a sincere concern to be fair, and I appreciated his call.

I asked him a question: the Freedom From Religion Foundation is mentioned in the article as having “been watching the rallies with concern”, and its co-president Annie Laurie Gaylor is quoted. Did he contact FFRF, or did they contact him? Erickson told me that a supporter of FFRF had been the one who initially contacted the State Journal about the Rosary Rally. So, if you were among those Catholics who enjoyed the article and photos, you have FFRF to thank.

I asked Doug Erickson whether the folks who protest our rosary rallies are FFRF affiliated. He said some are, some he thought might be Planned Parenthood affiliated because they have a contraception message–although, FFRF also often speaks of contraception. Erickson stated that he is concerned for separation of church and state.

Maybe the protester with the great big peace symbol who gave me a halo in the beautiful newspaper photo is an FFRF guy? Wow, I am humbled. I wonder if the person last week with a banner with a Bible verse about how one shouldn’t pray on street corners is with the FFRF? I rather like that! A Lutheran brought up the same thing in the discussion comments on the newspaper website: “Remember the words in the book of St. Matthew 6:5, ‘And when you pray, do not be like the hypocrites, for they love to pray standing in the synagogues and ON THE STREET CORNERS TO BE SEEN BY MEN. I tell you the truth, they have received their reward in full.'” I replied to him–and you will see why I say “I like that”:

Jesus criticizes those who pray “in synagogues and on street corners” in order to look pious and admirable. Obviously, he did not mean you cannot pray in a synagogue, and by exactly the same token he did not mean you cannot pray on a street corner. His point is against spiritual vanity and insincere prayer that is empty show and not really prayer in faith. The Gospels obviously show Jesus praying in public, and in John 11:42 he even states out that he is praying aloud not because he needs to say the words for his own sake but in order that others may hear him speaking to his Father. He also spent much time off by Himself praying, and so should we. Sometimes anti-religious atheists are tempted to use that Bible verse as a stick to beat us with to drive us away, though they have no belief in the Bible nor are they arbiters of whether our prayer is true prayer. Perhaps an attempt to follow #4 of Alinsky’s “rules for radicals”: “‘Make the enemy live up to its own book of rules.’ If the rule is that every letter gets a reply, send 30,000 letters. You can kill them with this because no one can possibly obey all of their own rules.” But they are mistaken about what the rule is; it’s not literally “you can’t pray on a street corner”, it’s more like “your prayer should be truly oriented to God”. We should thank those who want to insist that we pray authentically (though whether we are is between us and God).

Prayer is not a feeling, and certainly not an appearance. It is relationship, love, conversation with God. Protests, criticism, bad press (though not everyone thinks this was), bad weather, “wrong location”, or even the fact we are sinners, do not prevent prayer from being prayer. I might be sad if we were really being persecuted for being political partisans. I do not want the rosary rally to be, or needlessly seem, partisan. Please, I beg, if you must persecute me, do so for my loving and following Jesus Christ! But with the Freedom From Religion Foundation involved, we can rest in blessed assurance that that is the intent. Let us keep them always lovingly in our prayers.

One Response to The Rosary Rally in the newspaper, a Beatitudes-type blessing from the Freedom From Religion Foundation