Freedom rings from the bells of Holy Redeemer Church

Churches nationwide were urged to ring their bells at noon on the 4th of July, for the end of the Fortnight for Freedom. I was walking along West Gilman Street when I  heard the Angelus bells ring at noon yesterday, as they do every day (this is one of the precious things about Holy Redeemer Church) and I stopped on the grass by the street and prayed. As I began walking again, I heard more bells, sounding now for the end of the Fortnight! 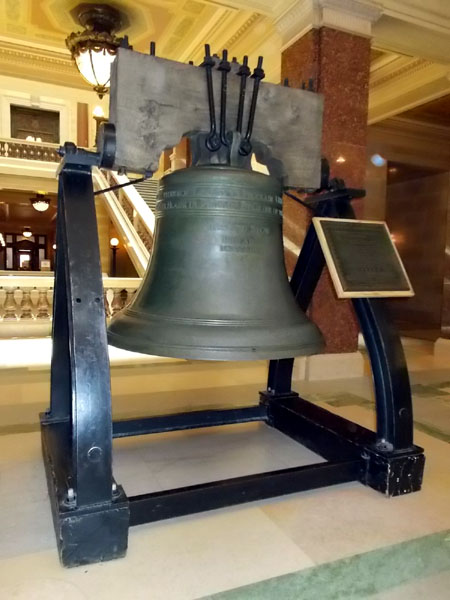 This evoked the ringing of the Liberty Bell, the big bell in the tower of Independence Hall, and the many church bells in Philadelphia, to announce the Declaration of Independence, signed on July 4, 1776. “We hold these truths to be self-evident, that all men are created equal, that they are endowed by their Creator with certain unalienable Rights, that among these are Life, Liberty, and the pursuit of Happiness.” Above, the Liberty Bell copy in the Wisconsin Capitol. 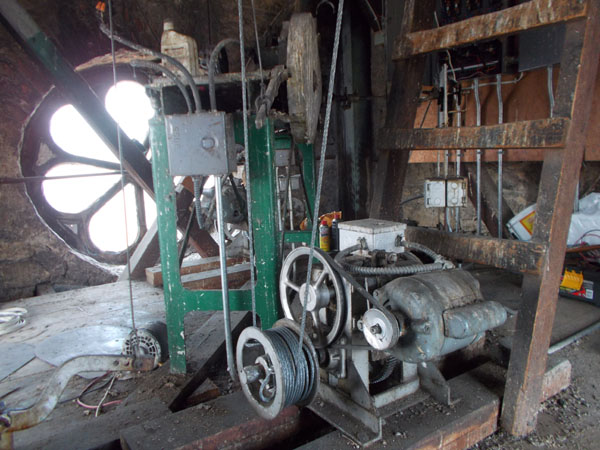 I hurried toward Holy Redeemer (the lovely interior of which is the top banner image of this blog). Rich Bonomo’s car was there, so that told me who was letting religious freedom ring. I found him in the innards of the church, up where the mechanism is that make the bells and the clock work.  He loves Holy Redeemer Church as though it were, he said one time, a demanding wife, and maintains all this and keeps the old building in shape. “I should get a hooded robe, and a hunch back,” he said wryly. By the way, one of the other precious things about Holy Redeemer Church, is that since there is a Traditional Latin Mass there is still the possibility to experience “Quasi Modo Sunday”, “Low Sunday,” the octave day of Easter, and one may still hear this famous introit sung! The way up involves rickety ladders, the one leading up to this space requires standing on the very top end of the side piece of the ladder, which just seems like something one should never do. Wearing a long skirt as is my habit also makes this procedure more difficult. 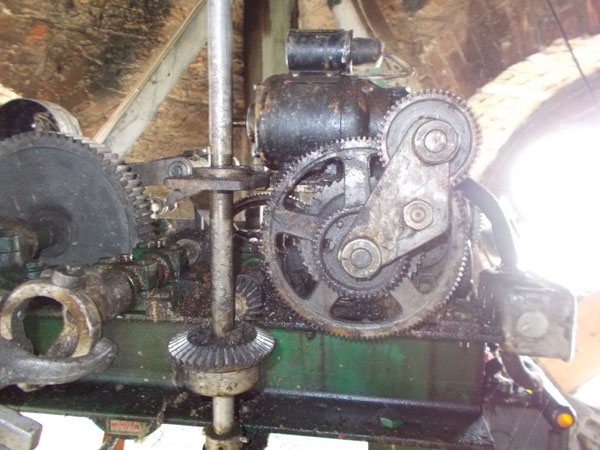 I think this awesome gear thing has to do with turning the clock face.

I believe this has to do with ringing the Angelus three times a day. On the right you can see a piece bolted on, modifying the notch in the wheel in order to make the Angelus ring at 8am rather than the traditional 6am, out of respect for downtown neighbors who may not be early birds.

While I was up precariously exploring among the bells, Rich knocked something with his elbow and that bell there tolled very loudly (a bell tolls by a hammer stroke to the outside, considered a more mournful sound. It peals when it is swung, considered a joyful sound). He’d inadvertently activated the Angelus sequence, which he was then able to halt. I was not really in danger but I was so startled that then I trembled so I could hardly hold the camera steady to take pictures!

The church history indicates that the main church was completed in 1869 and a steeple was built some time after, which was damaged in 1877 and completely rebuilt in 1880.  The three bells were installed in 1895. The largest bell was donated by the pastor, Rev. Aloisius Zitterl. It has a great motto: “I announce the Sabbath. I arouse the slothful. I scatter the winds. I appease the avenger.” It’s in English, though this was a German speaking parish, and it is recorded that in 1905 Father Zitterl wept on the occasion of the first English sermon at Holy Redeemer, “seeing that the days of the old language were numbered.” 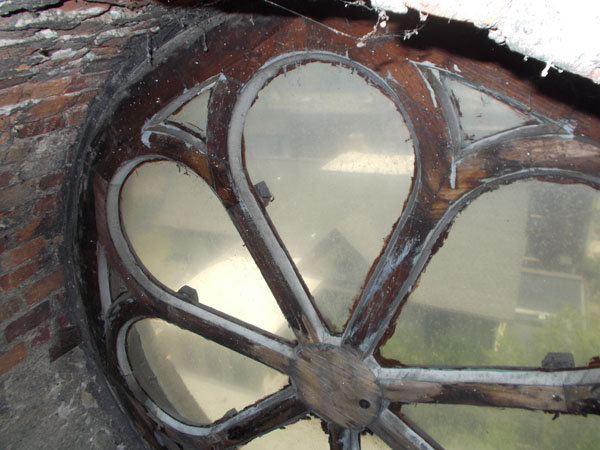 One of the seven-petaled rose windows, seen from the machinery room. These windows have clear plexiglas type plastic protecting them from the outside so they are only semi-visible now, but there are others over the main part of the church, which actually shed light on an attic area above the nave, that are deteriorating significantly and Rich is working with the UW art department to get new ones made with custom metal frames that will be more durable. Since there are remains up there of older window frames, even the current ones seem not to be the originals. 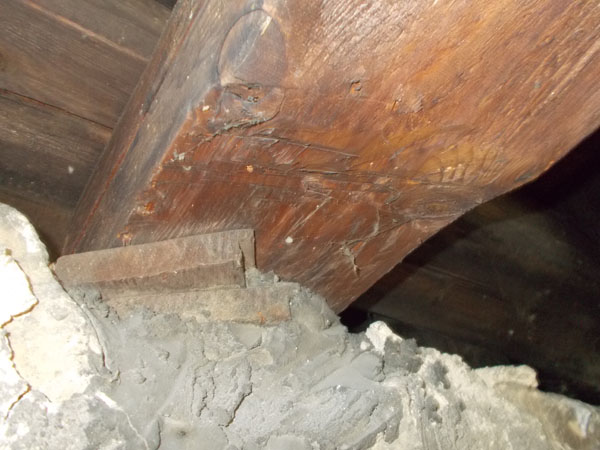 One of the satisfying things about old buildings is they were not made with power tools. Likely whoever made this beam fit and be stable in this spot would think I was strange for taking a picture of their work. An expert in historic structures told Rich that Holy Redeemer Church, with its massively thick stone walls, could be expected to stand another thousand years [correction: Rich says he was told 1500 years]. One must keep the long view in mind. 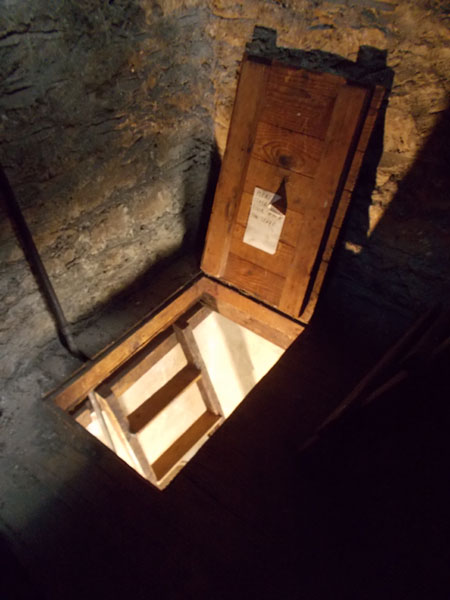 This concludes our tour of places that are not at all on the regular tour.

Richard “Quasimodo” Bonomo. His day job has to do with plasma physics research, in the Fusion Technology lab at UW. He is friend to so many in the local Catholic community, and has also long sung in the 9am Sunday (Novus Ordo) polyphony choir at Holy Redeemer, and is often a reader, cantor, altar server, catechist, etc, as well as for many years volunteer maintenance supervisor for the several buildings on the Holy Redeemer property.

Religious freedom (to circle back to the original topic) has many powerful enemies arrayed against it today. Holy Redeemer’s bells ring over a city where even our Capitol Rosary Rallies (non political and consisting entirely of praying 15 decades of the rosary) weekly attract anti-Catholic protesters who, for instance, shout vile things at children, accusing the good priests at the event as child molesters. Some are the same ones who went to Janesville in support of the dissenting “nuns on the bus,” and some of their signs and shouting “solidarity with the nuns on the bus!” reflect that. Make no mistake, the support for that is generally against the Church, a “soft” anti-Catholicism, as opposed to the “hard” anti-Catholicism of the Freedom From Religion Foundation. Both the soft and the hard anti-Catholicism are set against the liberty of the Church and the freedom of individual Catholics to, as Bishop Morlino put it at the first Rosary Rally, “do what we need to do to go to heaven.”

In 1500 years, when Holy Redeemer Church is finally crumbling, there will still be faithful Catholics, and the world will still be against them, because although they represent true freedom, extended to all, in Christ they are indeed a sign of contradiction.