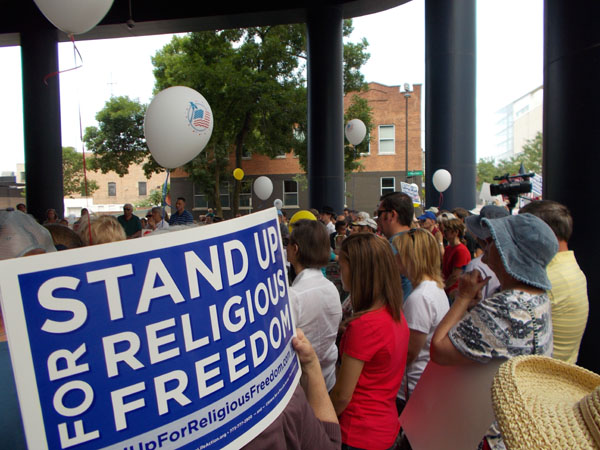 Our Stand Up For Religious Freedom Rally was  a great success, with stirring speakers and head count of 300 attendees! I believe and hope that everyone who attended was encouraged and formed by the experience–one of the organizers said afterward “I see the event as an opportunity to inspire/train the spiritual warriors attending”. Rally Captain Michael Murphy and the rest of the team of friends stepped up and did a great job, it really came together–the previous rally was organized by Pro Life Wisconsin, which had committed this time to organize the Milwaukee rally. The intent now is to form a group called “Stand Up For Religious Freedom-Wisconsin”. “Stand Up Rallies” were held in 164 cities across the country. At the biggest, in Chicago, a record crowd of 3,600 people attended! 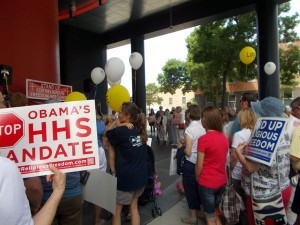 People gathering at the Federal District Courthouse in Madison shortly before the rally. 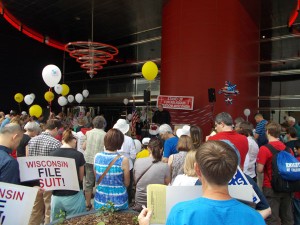 Fr Rick Heilman led an opening prayer. Some of the speakers drew attention to the fact that no Wisconsin organization has yet signed on to the coordinated lawsuits against the HHS Mandate, and that is what the "Wisconsin File Suit" signs refer to. The Alliance Defense Fund is a group willing to represent any organization or business that wants to join the suit, for free. 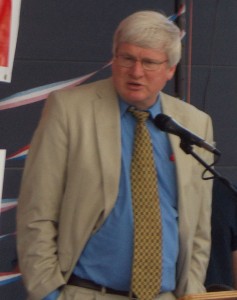 State Senator Glen Grothman has been a big pro-life force in the Wisconsin legislature. 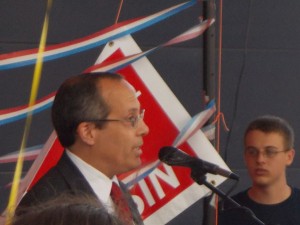 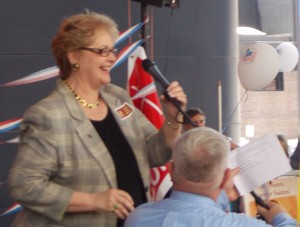 Julaine Appling, President of Wisconsin Family Action was all fired up! In front of her here is the back of Representative Evan Wynn's head, he spoke to us also and did the introductions of the speakers. I am sorry my pictures of his face are even blurrier than these others.

Sister Maria Christi of the Dominican Sisters of Mary, Mother of the Eucharist spoke from her heart. This wonderful order is focused on Catholic education was formed in 1996 but has grown by extraordinary leaps and bounds, there are now 100 sisters. 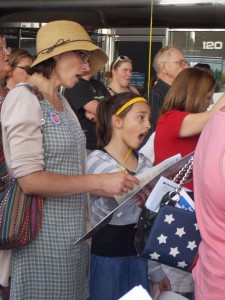 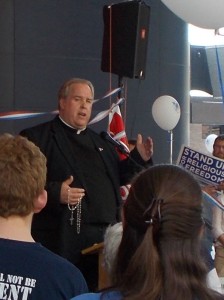 Father Rick Heilman led us in prayer, the rally officially concluded with his words of charity toward the anti-religious counter-demonstrators, and the whole crowd turning to face them who had chanted and yelled through the whole rally, and praying for them all together the Our Father: "...forgive us our trespasses, as we forgive those who trespass against us, lead us not into temptation, but deliver us from evil. Amen." 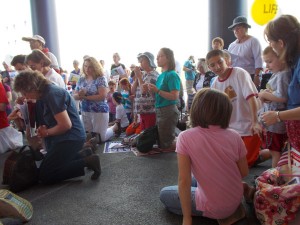 A large number of people stayed and knelt to pray the Chaplet of Divine Mercy with Father Rick. 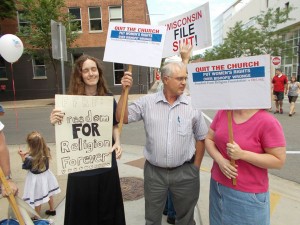 The Freedom From Religion Foundation's headquarters happens to be on the very same block as the Federal Courthouse where our rally was held (it's also diagonal from the site of the St Raphael's Cathedral School building). Knowing this, I came prepared with a sign: "FFRF: Freedom FOR Religion Forever!" This couple with FFRF "Quit the Church" placards saw "FFRF" at the top of my sign and thought I was part of their group, till I had them read my sign more closely. I persuaded them to join me in a photo... well, they were sort of persuaded. I'm the one who looks happy! Someone told me Syte Reitz identified one of the women (not shown) as Annie Gaylor, Jr, daughter of the founders of the FFRF. I showed them all my sign and happily told them all about my love for the Catholic Church and that I love them and already pray for them, and that Jesus wills to save them through His Bride and Body, the Catholic Church. They did their honest best to be really obnoxious at our rally, but I thank God that He let us have this experience of being opposed, reviled and mocked, like in the psalms and like Jesus told us would happen! 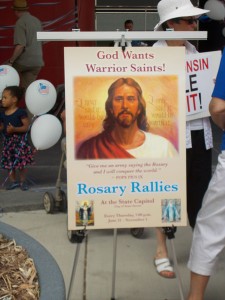 But that's not all! Everyone was invited to the Rosary Rallies for Life, Family, and the Conversion of the World, 7pm Thursdays at the State Street steps of the Capitol, starting June 21st! Fr Rick wants to take this effort national. 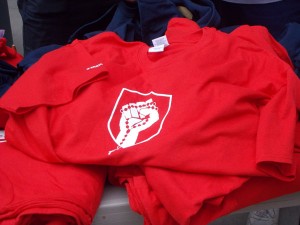 Rosary Rally T-shirts were on sale, in red and navy versions! Someone noticed the "Recall Walker" fist is a left fist, therefore they made this a right fist, with a rosary! On the back, it says "Capitol Rosary Rally 2012" and "Give me an army saying the rosary and I will conquer the world - Pope Pius IX" On the right sleeve is printed "Warrior Saints". These should be for sale ($15) at the rosary rally itself also.

One Response to Madison’s June 8th Stand Up For Religious Freedom Rally!