The Miracle of the Multiplication of the Backpacks

I wrote before that I quite enjoy my volunteer job at “Vinnie’s Lockers” helping the homeless to store their belongings. There is one client, Maurice, who has been telling me happily about his small business plan to sell incense and scented oils on State Street, and asking for one of the backpacks we give out, to carry his wares in. We got in the free backpack business after my friend Marsha’s Village Bagshop on State Street was closing after many years of operation (which still makes me sad); she sold me several backpacks for a small price to give out at the Lockers… well they clearly met a big need, so since then we have regularly sought donations from different parish conferences to buy large sturdy backpacks, usually in case lots. We get the ones with two large main compartments. We have probably given away 200.

Maurice genuinely had a business plan and had been telling me about it, he had a realistic idea of he was going to turn a profit on his products, and he intended to get a street vendor license, eventually pay taxes properly etc, and was both realistic and optimistic that he could pull himself up by his bootstraps. We try to give backpacks out prudently, so I told him I would give him one when he actually had the incense etc in hand. The things arrived on Wednesday, and you can see him here, with some of his wares, and the new backpack. He was able to store what he didn’t need to carry with him in his “Locker” (rubbermaid bin). I told him I thought the people paying for the backpacks would enjoy his story and seeing who was benefiting, and he was happy for me to take his picture. If you see this man on State Street you should consider buying some of his incense!! 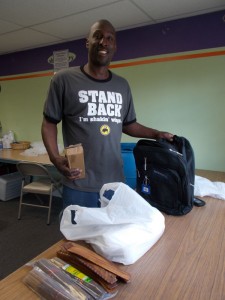 I think that’s awesome and I hope he will be successful.

After I took Maurice’s picture I thought it would be nice to give you a tour. This is the room with all the storage bins with people’s belongings. They can have up to two bins per person. The bins are numbered so we can find them. Those cardboard boxes on the left are the boxes of backpacks, and there was a mystery. St Thomas Aquinas conference just bought a box of 24 backpacks (they are ordered through eBay), and then there was mysteriously a whole nother box. We could not figure out where it came from or who bought it (is it possible they were there somewhere from a past purchase and we didn’t realize? but I don’t think so). My fellow volunteer Mike said he would like to think it is like the multiplication of the loaves.

Thank you to everyone, individuals or conferences, who has contributed to buy backpacks. St Paul’s University Catholic Center conference also bought a box of 24 in January after a successful Christmas fundraiser. 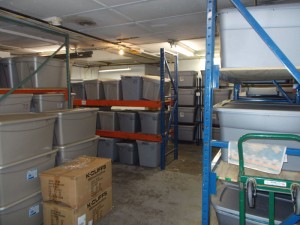 We have limited space and our program gets very full, so we regularly have to move the belongings of people who haven’t checked in in a couple of months into bags with a string tag with the person’s name, that go in our overflow storage room… which is itself overflowing. If they don’t come back after a year in overflow storage and we don’t have a way to contact them, only then do we discard people’s belongings. Before Vinnie’s Lockers started, people thought the program would not work, that there would be behavior problems and different kinds of abuses of the program. It has great dedicated volunteers that staff it, and it’s actually worked basically great, though we are constantly operating at capacity now, so a little worried we might eventually have to turn some new people away. 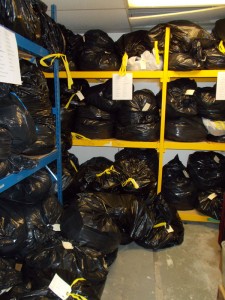 Besides backpacks, Blessed Sacrament in particular and I think also St Thomas conference has given generously to purchase winter items, socks, and personal care items. One of the happinesses of helping the homeless is that a $1 pair of gloves actually makes a difference in someone’s life and they are really grateful. If you want to make a good investment, give to the poor.

Another thing we have are Christian books, these come from the Catholic Truth Society, which is in England, they have a zillion different booklets which are beautiful and well written, and people seem to like them. Overwhelmingly most of our clients are believers of some sort. We have had this basin of books since the middle of 2009, and in case you are wondering no client has ever seemed bothered that our Christian books are Catholic, they know SVDP is a Catholic org so it is natural. We could use some more funds for these booklets.

And here is the picture of homeless Saint Benedict Joseph Labre, by Cathy the very very talented former Vinnie’s Lockers client (she happened to actually be Catholic too). The frame is from a St Vincent de Paul store and I had an adventure cutting the matte myself at University Book Store, don’t look at it too closely in person because it is not quite perfect.

The Vinnie’s Lockers building cannot possibly be mistaken for anything else. This is an old Quonset hut that was painted like this by the previous tenant, a T-shirt printing business. Yes, from time to time painting it in a more normal color scheme has been discussed, but to me at this point that’s just what Vinnie’s Lockers looks like. 🙂

The hut next door is the office of a very nice nurse from Meriter Health, who helps people, mostly homeless, for free.

Finally, across the way, is the very nice SVDP Service Center and Food Pantry. All this is down Fish Hatchery Road near the Beltline. Besides the food pantry, people can get clothing vouchers, prescription vouchers, or request a home visit from a parish SVDP conference, who will ascertain their needs for free furniture and other things, when they have moved into a new apartment and have nothing–among other assistance. Here’s the Madison SVDP website.