A woman. Made in God’s own image. Capitol Square. February this year. It’s raining. I didn’t do anything but take a picture as I hurried by on my way to Mass, and prayed for her. The point is that the children of God are suffering in every way you can think of, and some ways you haven’t thought of, and if we don’t help, it’s Jesus we failed to help.

The precious thing about Catholic charitable service, the thing that makes it something truly more than otherwise-similar service by others who feed the hungry, heal the sick, clothe the naked, and shelter the homeless, is loving the whole person, body and soul. Other people do good things; often they do more than us or do it better. There is a fullness of Charity that comes only through the Catholic Church–just as (and absolutely inseparable from) the fullness of Truth comes uniquely through the Church. The Church’s ministry to people’s bodily needs cannot legitimately be set against her ministry to people’s spiritual needs, even though sometimes, often, usually, we’re doing corporal works of mercy without actually speaking of the mysteries of Salvation.

It’s not that there’s a kind of Catholicism that cares about the poor, and a separate kind that cares about doctrine and morals, and some people are one type, and others are the other type, as if Charity-Catholics and Truth-Catholics were different parties with opposing interests, wrangling for “political” power. No, we need Caritas in Veritate, and Veritas in Caritate. Contemplative prayer contemplates God as Charity, and as Truth. These are not separate gods. Anyone who wants to save my body but is indifferent about saving my soul even though they know I have an immortal soul, hates me, in a way, and anyone who wants that my soul should be saved but is indifferent about my body and my natural life, hates me.

I have tried to advocate both to local and to national leaders of the Society of Saint Vincent de Paul, as well as within my own parish conference, that the Society should be publicly opposed to the HHS contraceptive and abortifacient mandate, and stand up for our religious freedom in other ways too. I’m not the only one who thinks this kind of thing matters; in December 2012 Pope Benedict XVI released an Apostolic Letter motu proprio ““On the Service of Charity”, that canonically mandates Catholic charity groups to take care about these things, to educate their staff in Catholic teaching, etc. They shouldn’t need a rule to tell them to do what is morally right and consistent with our Faith, but now they have such a rule.

My efforts were not very appreciated and have not had any observable effect, except that in my own conference (Cathedral Parish) the other young adults seem to agree the Society ought to be clearly opposed to the HHS mandate. Have Pope Benedict XVI’s efforts had any observable effect? Well, I hope so, but I haven’t noticed any, and there hasn’t been any communication from the Society mentioning “On the Service of Charity”. I did try to inquire about this locally a little while after Pope Benedict’s letter was released, and found out that the national higher-ups in the Society were actually discussing it, but mainly from the perspective of “how far down the line does it go?” in other words, perhaps charity organizations directly under the diocese are obliged to adhere to these principles/rules, but the Society of St Vincent de Paul might be able to get out of it?

After all, people like the Society of St Vincent de Paul–every year we get voted “Madison’s Favorite Thrift Store” in the Isthmus Magazine poll that includes “Favorite Sex Shop” and “Favorite Gay Bar” and a zillion alcohol related categories. People might not like us if we asked and catechized employees to live a Christian kind of life in keeping with good morals, and if the Society publicly registered disagreement with Obamacare’s contraceptive and abortifacient mandate. The former is deemed unthinkable on the grounds that we must not “judge others”, and the latter is deemed unthinkable on the grounds that the poor deserve health care, so we should not find fault with the legislation that proposes to do that.

I have been connected with the Society of St Vincent de Paul for long enough to know of a variety of things that cry out for “On the Service of Charity” to be applied. I just emailed the local Director of the Society today about another one. I told him also that I recently tried to interest some friends, leading members of the local Catholic community actually, to get involved in the Society, only to run up against the increasing sad phenomenon of Catholics who do believe as the Church teaches, not wanting anything to do with the Society of St Vincent de Paul.

One said (this was on facebook, so the quotes are direct): “I ended my involvement in my parish’s monthly meal program help when I found it to be a time of ragging on our wonderful Bishop Morlino. After two times of defending him, once verbally, and once by not participating in the rant session, I left the group.”

Another said: “I say this not to criticize or demean any of the local SVDP efforts, but I sort of decided I had little interest in the organization when they endorsed Obamacare…. With a limited number of hours and dollars I simply lack the ability to try to reform institutions that are subversive. I think that is why so many of the best apostolates are new.” He cited Our Lady of Hope Clinic, which is indeed a fantastic thing.

But I want to make a plea for faithful Madison Catholics to get involved with your local parish Conference of the Society of St Vincent de Paul. Here are some of the reasons why, that come to my mind:

I’m going to pull out #2 and say the whole thing again for emphasis:

The SVDP National Assembly is going to be held in Madison this September, presenting a unique opportunity for faithful Madison Catholics to bring to national leaders a message in favor of Pope Benedict’s “On the Service of Charity” and advocating standing up for our religious freedom.

Please, join me in participating actively in the local SVDP Society and calling for a high standard of Catholic fidelity and Catholic identity, as integral to our charity. 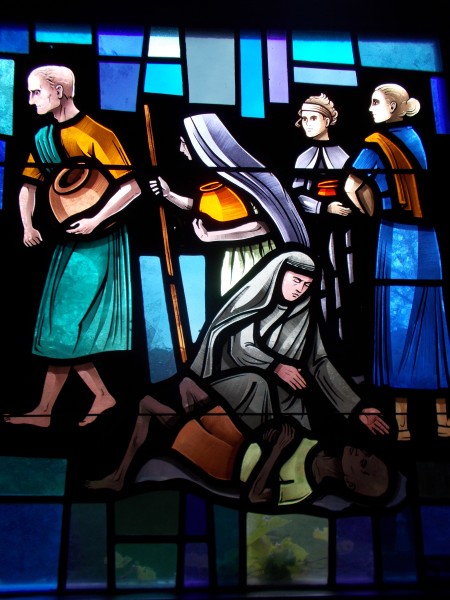