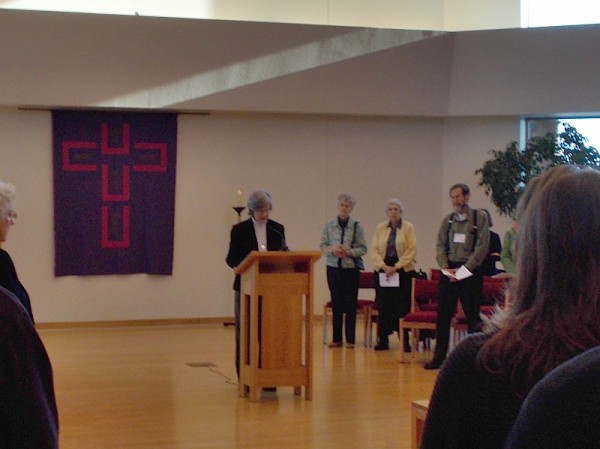 Bishop Morlino contacted diocesan priests, and also religious, presumably including head “Nun on the Bus” Sister Simone Campbell, the Sinsinawa Dominican Sisters, and the Saint John’s Abbey monks, and asked them to stop going to events at the formerly Catholic Holy Wisdom Monastery. I was quoted in a newspaper article today that highlights the bishop’s letter to priests on this topic.

Wisconsin State Journal reporter Doug Erickson was aware of and had posted on his blog back in February about my project of bringing lay people’s testimonies to visiting political celebrity Sister Simone Campbell and the two former Benedictine sisters on Ash Wednesday, this February 13th, about why Catholics shouldn’t support Holy Wisdom Monastery. I also, of course, blogged the rather dramatic story. The reporter also revealed at that time that at least one Catholic priest was there at HWM the next day (the 14th) attending a political event that involved Sister Simone. Doug has a considerable history with the story of Holy Wisdom Monastery, in fact the official information the Diocese supplies about HWM is addressed to him, in response to inquiries for a story he wrote at the beginning of last year.

When Doug contacted me for the story that ran today, and told me that Bishop Morlino had written a letter to priests in early March letting them know that they (priests) are forbidden to attend events at HWM, I told him I was aware Bishop Morlino sent around a letter, because two priests had told me in March that there was such a thing. However the priests didn’t tell me the content of it, because it was marked Confidential,–and out of respect for confidentiality I didn’t attempt to find out what was in it. I told him I don’t agree with leaks. But I gave him my comments on the situation.

His Sunday column is up this morning, and pretty good–except for the omission of the arguably more newsworthy information about the steady stream of religious that had been going there and giving talks, being asked to stop that. The article says:

“Holy Wisdom Monastery is perhaps best known among local Catholics for substantive rejection of the Catholic faith, so I would think priests or sisters should know they are not sending a good message if they attend events there,” said Elizabeth Durack of Madison, who attends the Cathedral Parish in Downtown Madison and has been vocal in encouraging “faithful Catholics” not to attend activities at the monastery.

The monastery’s worship services, while attended by people from many Christian backgrounds, have become particularly popular among liberal Catholics and those displeased with Morlino.

Morlino, in his letter to priests, said it was his duty “to protect the integrity and unity of the faith.” There “is a grave potential for scandal and confusion among the faithful, owing to Holy Wisdom Monastery’s status as a former Catholic monastery,” he wrote.

Diocesan spokesman Brent King said no single incident or priest precipitated the bishop’s decree; however, King said, publicity surrounding Campbell’s Feb. 14 appearance at the monastery “brought more attention to a Catholic giving an address at a former Catholic monastery” and “added to the ongoing confusion.”

The Diocese of Madison has also posted a new statement, which includes this:

Given their former status, there is a natural sense of confusion among some as to Holy Wisdom’s standing with regard to the Catholic Church. In order to lessen confusion as much as possible, the leadership at Holy Wisdom agreed with Bishop Morlino’s request in 2006 that the Catholic Mass not be celebrated at the new center and that the Blessed Sacrament no longer be reserved there.

Nonetheless, in recent years and months priests and religious from both inside and outside the diocese have participated openly in Holy Wisdom events, offering talks and the like. The clear presence and occasional publicity of such participation by priests and religious has leant itself to continued confusion among Catholic faithful, as to whether Holy Wisdom has regained some sort of recognition from the Catholic Church. To be clear, it has not.

The diocesan chancery has thus been in communication with outside priests and religious communities asking them to assist us with reducing further confusion and avoiding scandal, by refraining from formal engagements at Holy Wisdom. The confidential letter which was shared with the Wisconsin State Journal, was an attempt at requiring the same from the priests in the diocese, so as to avoid scandal and avert further confusion and was not intended as any public slight to Holy Wisdom.

Very interesting. What I am reading between the lines here is that Sister Simone, the various Saint John’s Abbey Benedictine monks who used to visit there, the Sinsinawa Dominican Sisters who used to visit there, and various other religious, were also contacted by the diocese and asked not to be part of any official events there. The Sinsinawa Dominicans who were going there included (but were not limited to) the “Wisdom’s Well” ones who raised such a ruckus that Bishop Morlino was being baffling and unfair by not allowing them to also give talks in Catholic parishes. I hope the diocese also reached out (as I did, by mail) to the other Federation of Saint Gertrude Benedictine Sisters’ communities that had continued to keep Holy Wisdom and another former member monastery on in an “affiliate member” status even after they not only left religious life but left the Church.

That the diocese followed through in this way is a big relief. My concern is that, with the situation of religious indifferentism in certain sectors of religious life as severe as it is, there was severe danger of scandal not only to the lay faithful but to some of the more radical religious.”Scandal” means leading someone else into sin. Others could see that Holy Wisdom continued to receive support of fellow religious; the danger was that if they were tempted to do the same thing HWM did, the tragedy could get repeated.

My prayer is that religious will help each other to stay faithful, stay on board the Barque of Peter, the Church, participating in her mission, following Jesus ever more closely, growing in holiness. The Holy Wisdom tragedy probably wouldn’t have happened without other religious supporting them doing that. We love Sisters and want them as holy examples to us, supporting us in our own faithfulness.