Action Alert: Pornographic Sacrilege and anti-Catholicism in The Onion

The Onion satirical newspaper had a sacrilegious, anti-Catholic, pornographic headline? You don’t say? Not exactly a man-bites-dog story is it? 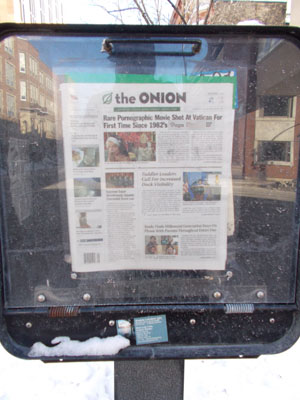 Anti-Catholic, porn-film-themed headline from the satirical Onion, taken today on N Carroll St near Capitol Square. I blurred the last part of the headline as it goes beyond what I would show on my blog even to illustrate what kind of vileness I am referring to.

I’m not laughing, and after seeing the latest horrendous headline (which was VERY FAR from being the first such) I decided today to get up and do something. I also prayed, particularly at Mass this evening.

I wrote a letter, printed a bunch of copies, and spent part of my afternoon walking around the Capitol Building, down State Street, delivering it anywhere The Onion was being distributed free inside a business or public space. The Governor and Attorney General got copies since The Onion was being distributed in some government offices, so did many State Street businesses, though I did notice there were places I know it used to be, but is not anymore. The University Library and Memorial Union got my letter too.

Now I’d like to ask your help contacting their advertisers. With school out in Madison this was a thin issue with a limited number of advertisers (I’ve listed every one of them, I think), but it would also be a fine idea to look in other issues of The Onion and contact those advertisers too. I am busy tomorrow so please help, friends, though if contacting by phone Monday would be a good idea. I have mostly copied this info from their Onion advertisements and do not have time right at the moment to put together mailing or email addresses. if you have time to gather those, then post them in the comments. Some are also on Facebook and Twitter.

Then, contact The Onion [email protected] and the Madison local sales person [email protected] to let them know that you contacted their advertisers, and why, and you could let them know I took the time to visit a number of places in Madison that distribute The Onion, to give them a letter complaining about the publication. I will also contact them I just do not think I have time today or tomorrow. [update: I am adding a contact form you can use to send a message to The Onion, at the bottom of this post. I beg if you have time please also contact advertisers.]

Indeed one of my letter recipients advised me to contact the advertisers, the very nice Laurie, owner of Fair Trade Coffeehouse, who actually sat down at a table with me, and stated she would call the Onion and speak with them about it. She told me that a few years ago, when The Onion was still based in Madison (it has since moved its editorial offices to New York City), The Onion took a picture of one of her employees, then used it later with an article about masturbation; it was upsetting and he seemed to have no recourse. When they tried to take her picture on another occasion, she knew better!

Here’s the letter I gave to all the businesses I could find that carried The Onion, and some government and university offices:

Peace to you. My name is Elizabeth Durack and I am a 34 year old Madison woman who lives here in the central downtown neighborhood. This week I saw on the front cover of the Jan 3 edition of The Onion satirical weekly newspaper one of the most deeply offensive  articles they have ever run, though there have been many other Onion articles with likewise sacrilegious, anti-Catholic, and/or pornographic themes. I’m not even going to cite the headline, because it was so foul and sick. The Onion used to be funny, but it’s gotten far filthier and nastier than it used to be, not shy about being over-the-top sacrilegious, and it no longer deserves to be distributed on the premises of your business.

I am taking this letter around to various places within walking distance today (for instance, State Street), Friday afternoon Jan 4 2013, asking you to stop allowing The Onion to be distributed at your establishment, because of offensive content and headlines.

Have a blessed New Year, and thank you for reading my letter in the neighborly spirit in which I write it,

Posted in Uncategorized on 4 January 2013 and tagged Anti-Catholic, Defending the Faith, Pornography, The Onion
9 Comments »

9 Responses to Action Alert: Pornographic Sacrilege and anti-Catholicism in The Onion