Christmas at the Capitol

Badger Catholic Blog had a news item about the Freedom From Religion Foundation placing an irreverent nativity display in the Wisconsin State Capitol rotunda. Since that’s 4 minutes walk from me, I decided to go see what was up.

Although it’s not actually Advent till Sunday, it turns out Christmas is very much what’s up; Governor Walker just today officially lit a huge beautiful Christmas tree on the first floor of the Rotunda, covered with handmade ornaments, many of them explicitly Christian, from children all over the state. It’s really a sight. It even has an electric train running around the base. 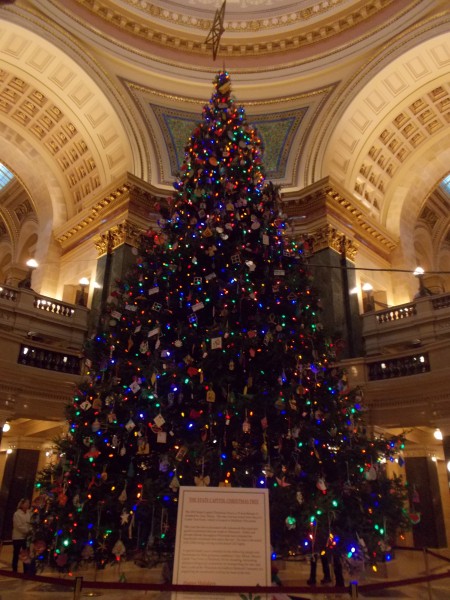 The Wisconsin Capitol Christmas Tree 2012, with thousands of ornaments made by Wisconsin children. Please excuse my poor photography. 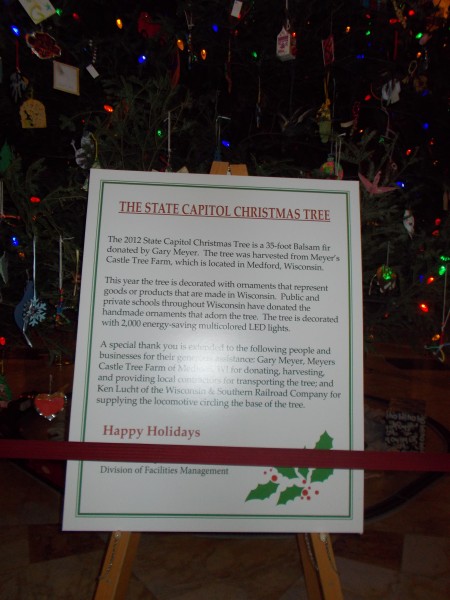 Clearly labeled as such. 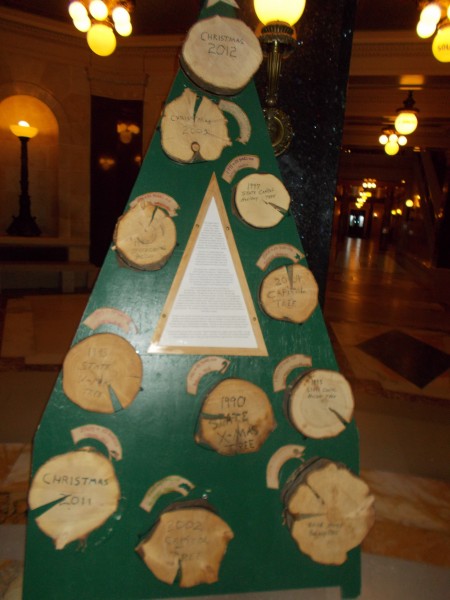 This was not true every year! Last year Governor Walker, a protestant Christian, broke the trend of labeling what is obviously a Christmas Tree a “Holiday Tree”. Trunk slices on this display identify variously a “Holiday Tree”, “Capitol Tree”, “State Tree”, or “State X-Mas Tree”. A news story from last year reveals the “Holiday Tree” nomenclature had been going on for 25 years… and atheists at the Freedom From Religion Foundation were angry that a Christmas tree was suddenly being called a Christmas tree again. The group’s co-president Annie Laurie Gaylor told the press that the governor’s intention was to be rude and mean: “The reason that it was turned into a holiday tree was to avoid this connotation that the governor chooses one religion over another. It’s essentially a discourtesy by the governor to announce that. He intends that to be a slight and a snub to non-Christians, otherwise he would not do it.” 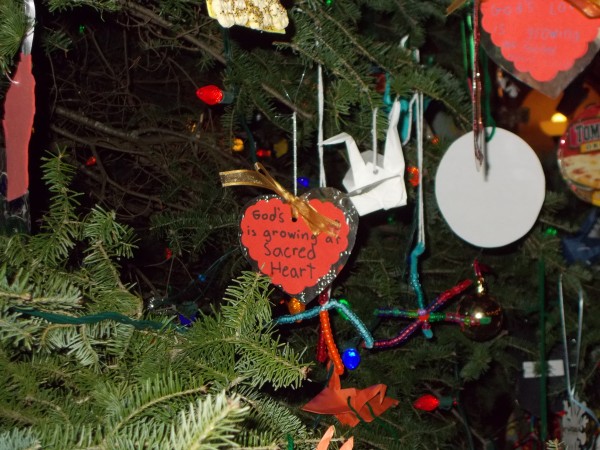 The tree is decorated with ornaments made by Wisconsin school children who were given the theme, products made or grown in Wisconsin. Thus there is an otherwise-baffling number of ornaments depicting Tombstone frozen pizza, and ornaments made out of half-pint milk bottles, etc. Students from Sacred Heart Catholic School delighted me with their heart ornaments proclaiming God’s love growing at their school. Why, you ask, didn’t I take another picture where the bow was not obscuring part of the text? Because there was a policeman hovering very near me zealous to guard the tree. This is good. They do not want the ornaments messed with. 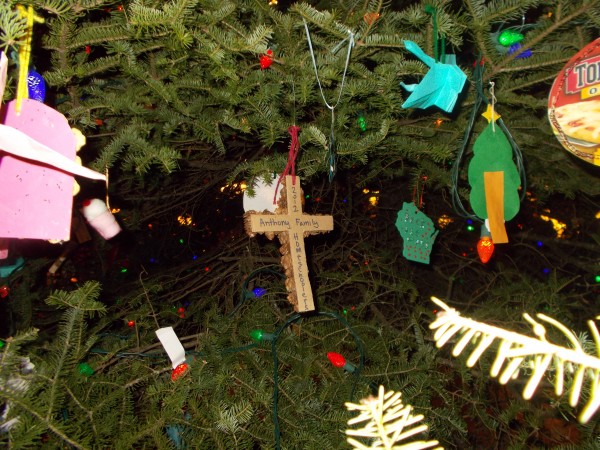 The Anthony Family Homeschoolers were also not interested in secularizing Christmas.

Up one level on the second floor of the rotunda, there were a couple more seasonal displays: 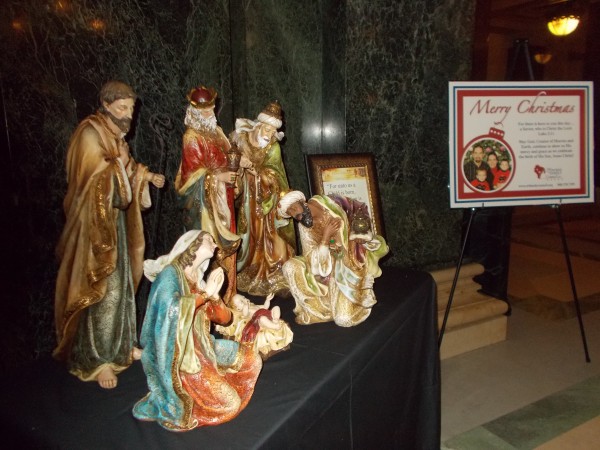 Wisconsin Family Action had a Nativity display. The Word became flesh, and dwelt among us. God Himself is revealed through the family, and through Christ we have become members of God’s family. In the Holy Family human and divine life are guarded with profound reverence, all our Good is here and will be given and shared; the gift of God is for all people. 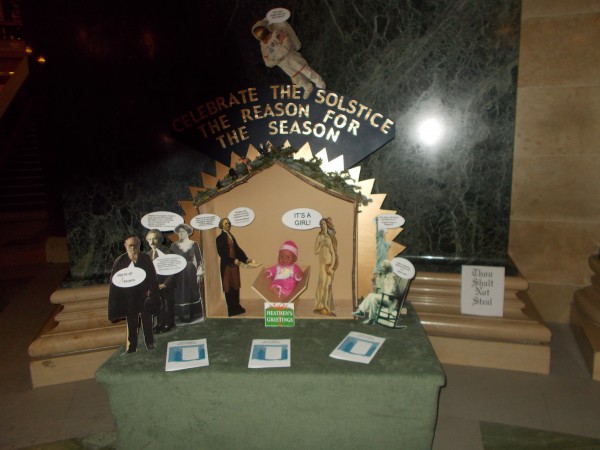 Then there’s this complicated display from the Freedom From Religion Foundation, which needs an accompanying brochure to try to explain it. It’s meant to be a “natural nativity” with the theme of “reality”. Thomas Jefferson, Botticelli’s “The Birth of Venus”, Mark Twain, and other cardboard cutouts surround a pink doll baby in a manger while an astronaut floats over the stable. The FFRF’s vision of reality appears to be a reaction against Christianity, as well as random, flimsy, ultimately meaningless, and unlovely. I kind of like the sign, “Thou Shalt Not Steal”: they think they are being ironic (and are perhaps overestimating the appeal and cachet of theor paper dolls), but they are able to appeal to natural moral law because reality is beautifully ordered by the Creator and able to be apprehended by human reason, and there is such a thing as moral Truth. The wrongness of stealing is not simply a “meme.”

As I was looking at the FFRF display, a couple approached me and asked if I would take their picture. “In front of that, no!” I said, “In front of the Christmas tree, yes!” The beautiful Christmas tree shot was what they wanted. After I took the picture, the woman puzzled over the weird and opaque FFRF “nativity” and asked “what is that?”

I explained it was a blasphemous protest against Christmas.

Neither does any person of good will! Christmas is alive and well, and it may do you and your family good, if you are in the vicinity of Capitol Square, to stop in and see the big delightful Christmas tree, and the (real) Nativity scene upstairs. The FFRF thing as you can see is sort of pointless. Christmas is about Jesus, Mary and Joseph, and it’s about your family, but it’s not just in the stable in Bethlehem and not just in your home, but public and for everyone’s joy.

It’s made me think. In recent years I’ve done hardly anything to decorate for Advent or Christmas. I want to now–I hope to outside too somehow. Around town lately I’ve found myself looking and looking to find any signs of sincere Christianity, aside from actual churches. I found a house with beat-up concrete statues of Mary and Joseph recently and was really quite thrilled. Make the Sacred visible, in as beautiful a way as you can, and I believe you will give encouragement to someone.

One Response to Christmas at the Capitol