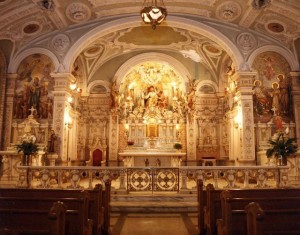 I wrote this as the end of the preceding post, but since it is really in a different vein I thought it belongs in its own post. Badger Catholic has another post today that is also a shocking illustration of our society’s willingness to destroy what is sacred. He’s had a fantastic series of posts with photos of some of Wisconsin’s most beautiful and unspoiled old Catholic churches. Today he has some of the most remarkably beautiful pictures of all… of St Joseph’s Chapel, a church in Superior, WI that was demolished some years ago. The post is appropriately titled, “AAAAAAAAHHHHH!!!!!”

It hurts. Saint Teresa of Avila, in the first chapter of her tremendous book The Interior Castle (it is so worth your time to click that link and read more), enables me to tie this back into the dignity of the human person:

I thought of the soul as resembling a castle,formed of a single diamond or a very transparent crystal,and containing many rooms, just as in heaven there are many mansions. If we reflect, sisters, we shall see that the soul of the just man is but a paradise, in which, God tells us, He takes His delight….

[W]e need not tire ourselves by trying to realize all the beauty of this castle, although, being His creature, there is all the difference between the soul and God that there is between the creature and the Creator; the fact that it is made in God’s image teaches us how great are its dignity and loveliness.

Posted in Life & Love on 8 May 2012 and tagged Beauty, Human dignity, St Teresa of Avila
No Comments »
Cancel comment response