The malice of the psychologists 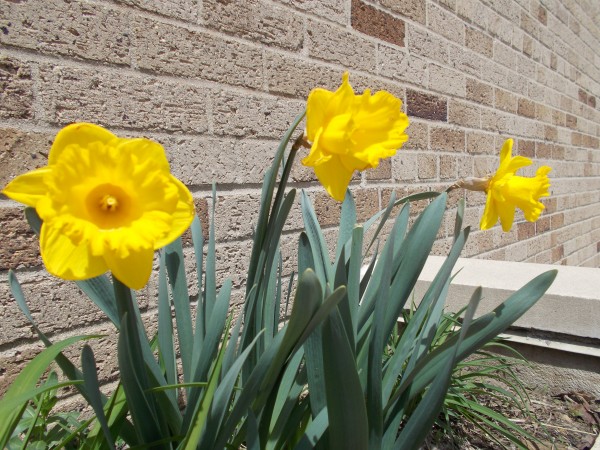 I don’t know why but every time I walked by these daffodils outside St Patrick Church they begged me to take a picture of them, and even though the picture of them is not very sharp, for some reason I love it.

I’ve talked many times on my blog about my volunteer job with the Society of Saint Vincent de Paul homeless program Vinnie’s Lockers. The people who come to us have all manner of troubles and ailments. Some are obvious, some non obvious.

“William” first joined a couple years ago, with an unavoidably obvious one. He is in his 30s and is good-natured and likeable. He has long hair in a ponytail and has generally worn female clothing when he comes to see us. In a conversation about this one time, he told me that this was something he decided to do when he was a teenager; according to him, female identity was something he had chosen. It is said that some men do this because they are same sex attracted, others because they are attracted to the idea of themselves as female; William seems to me to be one of the latter type. Either way their relationships are deeply affected and they present a false face; they are unable to live out what Pope John Paul II called “the nuptial meaning of the body”. William was diagnosed as having “gender identity disorder”, which these days is often “treated” mainly by helping the person to live contentedly as their preferred gender. He has long been in regular psychotherapy, and was prescribed female hormones that would make him grow breast tissue, softer skin and finer hair. He has sought for some while to change his legal identity and name to female, and in the past claimed someone from the Salvation Army was helping him with that.

It is not charity to cooperate with someone’s illness of this type. To do so is to cooperate in their self-deception and unchastity. God Who made him a man continues to look on him as a man, and this man is a son to his mother and father, brother to his siblings and father to his children, if he has any–and we should have the courage to witness to the goodness of all this.  I consider very firmly that one has to be truly and unfailingly charitable and kind to such a person, but to have the right kind of compassion toward them as someone who has suffered because of sexual confusion and been incredibly ill served by others who cooperated with it. I have known and cared about several people with similar problems, including an uncle, the now ex-husband of my aunt and father of my two cousins, who decided after many years of marriage to live as a woman, which broke up the family–who were Unitarian Universalists, whose “religious” training formed them to support him in that.

William had been gone for almost a year, and when he returned today I learned he’d been in prison again. I asked why,–then stopped myself and assured him that in no way need he tell me. But he is a talkative person who tends to reveal too much. He was convicted of possessing child porn on a computer several years back, he said. “I’d already stopped using it, but it was still on the computer” he said. This meant, in addition to prison time, getting put on a sex offender registry. That was years back. This time the imprisonment was because he was illegally using his preferred female alias that was not the name on the registry.

You know how I felt? I felt a lot of compassion for him. I have steadfastly never cooperated with William’s self-presentation as female, and at this point he apparently accepts that–and knows I care about him. Let us set aside the child porn and whoever made it and put it on the internet, which is the thing everyone knows is heinous. What kind of MALICE did that psychologist, or that “helpful” Salvation Army person who allegedly wanted to help him change his name, or any of the others who cooperated with his disorder, have toward poor William? Their evil “NICENESS” and “HUMAN RESPECT” (that accepts sin and disrespects God) encouraged and helped him not only to act in a way undignified, disordered, and unmanly, sadden and distress his mother, and stay homeless, but land back in prison again.  He says he is supposed to dress in gender neutral clothing now–which was gray sweats today, and I said I thought that is good. He is not supposed to shop for conspicuously female clothes, particularly not bras, though he can get a plain sports bra if he must because of the effects of the hormones… which because of the malice of the psychologists, they apparently cannot stop him from taking.

He had some lattice-straps black stiletto high heeled shoes which he was taking out of storage today. I said I didn’t think he needed those, or that anyone needed those. “They make me feel sexy,” he said.

They make me feel heartbroken.

Be unfailingly kind. Never cooperate with disordered sexuality. Love people and pray for them.

3 Responses to The malice of the psychologists