Two Thumbs Up for Carrying the Cross with Jesus! 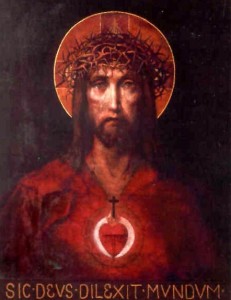 MOST sweet Jesus, whose overflowing charity for men is requited by so much forgetfulness, negligence and contempt, behold us prostrate before Thee, eager to repair by a special act of homage the cruel indifference and injuries to which Thy loving Heart is everywhere subject.

Mindful, alas! that we ourselves have had a share in such great indignities, which we now deplore from the depths of our hearts, we humbly ask Thy pardon and declare our readiness to atone by  voluntary expiation, not only for our own personal offenses, but also for the sins of those, who, straying far from the path of salvation, refuse in their obstinate infidelity to follow Thee, their Shepherd and Leader, or, renouncing the promises of their baptism, have cast off the sweet yoke of Thy law.

We are now resolved to expiate each and every deplorable outrage committed against Thee; we are now determined to make amends for  the manifold offenses against Christian modesty in unbecoming dress and behavior, for all the foul seductions laid to ensnare the feet of the innocent, for the frequent violations of Sundays and holydays, and the shocking blasphemies uttered against Thee and Thy Saints. We wish also to make amends for the insults to which Thy Vicar on earth and Thy priests are subjected, for the profanation, by conscious neglect or terrible acts of sacrilege, of the very crimes of nations who resist the rights and teaching authority of the Church which Thou hast founded.

Would that we were able to wash away such abominations with our blood. We now offer, in reparation for these violations of Thy divine honor, the satisfaction Thou once made to Thy Eternal Father on the cross and which Thou continuest to renew daily on our altars; we offer it in union with the acts of atonement of Thy Virgin Mother and all the Saints and of the pious faithful on earth; and we sincerely promise to make recompense, as far as we can with the help of Thy grace, for all neglect of Thy great love and for the sins we and others have committed in the past. Henceforth, we will live a life of unswerving faith, of purity of conduct, of perfect observance of the precepts of the Gospel and especially that of charity. We promise to the best of our power to prevent others from offending Thee and to bring as many as possible to follow Thee.

O loving Jesus, through the intercession of the Blessed Virgin Mother, our model in reparation, deign to receive the voluntary offering we make of this act of expiation; and by the crowning gift of perseverance keep us faithful unto death in our duty and the allegiance we owe to Thee, so that we may all one day come to that happy home, where with the Father and the Holy Spirit Thou livest and reignest, God, forever and ever. Amen.

Today is the Feast of the Most Sacred Heart of Jesus!There is a plenary indulgence–a grant from the Church’s treasury of the merits of the Saints, of complete remission of the temporal punishment due to sin–that can be received for public recitation of this beautiful prayer; one must also receive Holy Communion, go to confession, pray for the intentions of the Holy Father, and have an interior disposition of complete detachment from sin, even venial sin! Is that possible, you ask?! Yes, Fr Z explains!!

This is very wonderful:

At the top of the post we had an ancient and classic image of the heart of Our Lord. This one is not one iota less wonderful and whereas the artist of the top image is unknown to us, the story of the young artist of this picture was recounted today by Fr George David Byers on his blog, Holy Souls Hermitage. I think Fr George won’t be mad at me for quoting him extremely liberally! This post is titled: Atheism answered by the Most Intense Suffering of a Little Boy and the Sacred Heart of Jesus.

When I was a parish priest in a certain country parish, one of the children of the parish family — some nine years old – was suffering in a most horrific way. I’ll spare you the details of his suffering which continued for very many years. His doctors said that he should be continuously screaming in pain.

I would go over to their house to bring Jesus in Holy Communion. The whole family would be there. We would all talk for a bit as a lead up to him receiving Jesus. He was always eager to learn more about Jesus. Always.

When it was time to begin the short rite for Holy Communion outside of Mass, he would instantly stand up, now totally oblivious to all other things, hands folded, in wrapt attention before our Lord and Savior, who was very much known by this little boy to be a close Friend.

Afterwards, with the whole family — a large family! — gathered in the living room around the television, the young fellow would want to compete with me on some sort of car racing video game by way of some gadgets hooked up to a gadget hooked up to their television. I never did, since I know nothing about such things. Instead, his older brothers would pitch in and have a great time of it, all for my benefit, it seems, as they were intent on getting me up to speed, as it were, on the Who’s Who of the car racing world. And they knew everything, up to the minute, of racing right around the world.

Because of the almost unlimited expenses of health care interventions on his behalf, I wanted to have a fund-raiser in the parish. This went extraordinarly well, reaching well into six figures, and then well beyond that. We had a prayer written up on the raffle cards that everyone sold to everyone far beyond the territory of the parishes by about 500 miles in every which direction. The prizes included a semi-automatic browning 12 guage shotgun. Yikes!

It soon became an ecumenical project simply because so very many non-Catholics were pitching in as a project of their local communities, again, even from more than a 1000 miles away.

This brought some trouble, which our Lord permitted, it seems to me, to instruct a few people of the reality of Jesus among us.

The freakish atheist groups started harrassing the little guy, saying that because of suffering, he should just spit in the face of Jesus and be done with religion. Some would even visit the family home to convince him at any cost to give up on religion. They were, of course, working out problems in their own lives by way of this little boy.

And then everyone would witness what always happens when suffering is conjoined with fidelity, fidelity, fidelity, with good friendship with Jesus. When these knuckleheads would come over, they would be greeted politely. They would start into their impassioned pleas. With some in took only thirty seconds. Others were allowed to go on for a minute or two, but then it would happen.

The little fellow would give them a response, going to the heart of their personal problems, right to their core of their beings, baring their souls for all, particularly for themselves to see, starkly, surely for the very first time. And with only a few words.

They would then leave, jaws dropped, dumb-founded, shaken, perhaps enough to get them to be on their way to heaven.

Fidelity amidst suffering — looking to Jesus instead of to ourselves – brings one to this awareness of the plight of others, for suffering sets priorities straight, casting off what is unimportant and pointing us right to heaven, to Jesus. We see how bad a situation original sin has cast us, and we thank Jesus all the more, with rejoicing humble thanksgiving, for reaching into this world to get us, taking on what we deserve, having the right in justice to have mercy on us, to have us die to ourselves to live for Him, to have us not just carry the the consequences of original sin as our cross (weakness of will and mind, emotions all over the place, sickness and death), but to have the capactity, the grace, to look to Him, to Jesus, following Him, in close friendship with Him.

When this little fellow and I were talking after Holy Communion, he quietly blurted out the sentence which you can read in the above image:

“JESUS IS HELPING ME TO CARRY THE CROSS

BECAUSE HE CARRIED IT ALL THE WAY.

FOR CARRYING THE CROSS WITH JESUS.”

[there’s more to this post, you can visit Fr George’s blog to keep reading! Atheism answered by the Most Intense Suffering of a Little Boy and the Sacred Heart of Jesus]