Some months back I saw a video (above) that showed one African-American woman’s sad and astonishing internalization of racism and specifically of the Planned Parenthood style of eugenics and of reducing the welfare rolls. The woman was at a rally supporting reelection of the first black President of the United States, when she made a tirade against a (white) Presidential candidate she didn’t support, which was captured in a YouTube video: “They want to get rid of, they want to make abortion illegal. That don’t make sense m—–f——. What, we gonna have all these ugly ass, nappy headed kids running around here hungry?” No one could watch this without being heartbroken; and the way she felt about children implies something about how negatively she thought about herself.

A couple of Saturdays ago, the first beautiful spring Saturday after the long winter, I came to the bus shelter on the island at the mouth of Monroe Street, across from Camp Randall Stadium, where there were three women: a white female college student, a white woman with hair in cornrows who was the friend of a black woman, heavily pregnant with preschool aged twin boys. The boys were evidently driving their mom nuts making noise and roaming around, and both she and the woman in cornrows had really lost their cool; the mom threatened along the lines of, “you need to stop, you want the policeman come and put you in the police car and arrest you and take you away? You not going to like that.” This specially pained me, because she was not the first black mom I’d heard threatening her son in just this way, and how does that teach the kids to see themselves? The “reprobates” continued being normal small boys, and their mom asked, “You going to act like this when the baby comes?”

“No,” said a sweet little voice.

One boy sat down on the bus bench and began pointing in random directions and asking “who that?” The college girl tried telling him there was no one there. He pointed up, toward the plexiglas roof of the shelter. “Who that?” he said. Wondering if he’d know what I was talking about, I said, “God is there. God is everywhere.” His mom was standing just outside the shelter, and she looked at me with a thoughtful expression.

The college girl asked his name. She asked a couple times, while he glanced at her shyly. Finally he said, and without any ironic tone, “Garbage.”

Everyone in the bus shelter was a little stunned. “Nobody’s name is Garbage,” I said. “Nobody at all. Your name is Precious and Loveable.”

“How can you say that in front of strangers?!” said the mother, flustered. “Tell your name.”  He didn’t. It almost wasn’t clear whether he understood or remembered what to say. Now, small children can be contrary and that was probably what was going on, but she had to supply their names.

“Your children are very charming,” I told the woman. I meant: relax, they are not bothering us, we like them, and miraculously it was like she heaved a sigh of relief. What I was also thinking: this is a poor woman who chose life for her twins and not the garbage can, and then chose life again rather than the garbage can, for another little one soon to be born.

The bus came soon after, we climbed aboard, and the college student and other people were talking to the little boys on the bus. Their mom had relaxed and had a look of relief and peace while people enjoyed her kids.

Yesterday I got on the bus at the West Transfer Point and a typical, boisterous group of 4 or 5 black high school boys and girls got on the bus with a big stroller. In the stroller was a small girl about the same age as those twins, which is to say, notably older than babies are normally in strollers. The boy in charge of her was the oldest in the group, I wouldn’t say he was more than 15 or 16. The others headed for the back of the bus; you had to go up a couple stairs to get to the back section and it was impossible to bring the stroller. He protested to them a little; they must have suggested that he have her come back there with him.

“She can’t walk”, I heard him say to one of them. She was sitting entirely quietly, alert but unconcerned, which surprised me a little, since most children that age would be distressed if their carers walked away.

The bus was about to leave the the transfer point and I got up and pointed out to the boy, “hey, if you are not going to stand with the stroller, have the driver secure it there.” There are retractable straps with hooks at the end, meant for wheelchairs, so they don’t shift around. I worried for a moment that he would be testy, since he wanted to be with his friends, but this kid didn’t hesitate a moment more, but went and unbuckled her, scooped her up and carried her to the back of the bus. I liked him and had a sense of his even temper. “My baby has Down Syndrome” I heard someone say matter-of-factly.

They talked animatedly. I couldn’t hear what they were talking about, but the idea of this group of adolescents or young teens having a good time, and showing no sign of seeing the disabled baby as a drag or a burden, and the little girl getting to be with these cheerful kids, moved me deeply. When I rose to get off downtown, I glanced at the back of the bus and there was the little girl sitting contentedly in the middle of the back bench. She had a beautiful face, and did not particularly look like a Down Syndrome child. Monsignor Holmes said a while back, in a homily: disabled people can seem useless, they seemingly contribute nothing. But, he said, the nicest, kindest, most unselfish young people he’d ever known were those who had a seriously disabled sibling.

In a sense the stories I am telling have little (or pretty much nothing) to do with race, which is an accidental element. But knowing that black women are three times more likely to have an abortion definitely affected how I experienced these situations. To be frank, it really makes you grateful to see a black child! And it’s almost painful to think people might need to be reminded, but there are some people who need to be reminded, and need to know through our actions, probably moreso than words, that we think so: it’s very good to be born, and it’s very good to be born black.

At one of the Stand Up For Religious Freedom rallies someone had a lot of copies of a documentary movie MAAFA 21: Black Genocide in America which is about Planned Parenthood and how it is, let us say, not the friend of African Americans. My DVD player was out of commission at that time and for a long time after, so I never have watched the film, but I think I will, and I have several copies of this DVD that I was told I should take home and distribute somehow. If anyone reading would like one or knows someone who should have a copy, please leave a comment, I am happy to mail it to you free. It can also be viewed online. 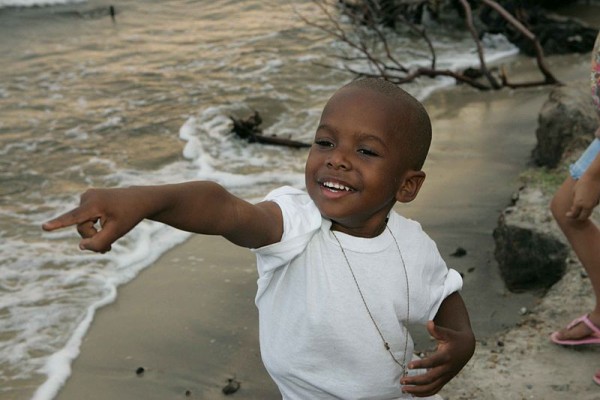 Posted in Life & Love on 3 May 2013 and tagged Down Syndrome, Parenting, Pro Life, Race
2 Comments »

2 Responses to Precious and Loveable